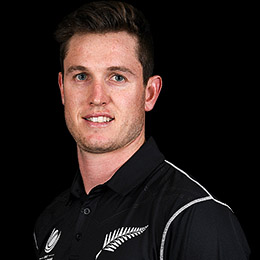 One of New Zealand's promising young talents, Adam Milne impressed in first class cricket and in the 2018 Champions League for Central districts at the age of 18. He was selected for the Kiwis in the T20I series against Pakistan in 2010 December and has played a couple of matches. He has not made his debut for the Blackcaps yet, but his performances in the shorter formats have been highly impressive. He made his ODI debut against Sri Lanka in 2012. For a few years, in was in and out of the circuit as he didn't turn heads with his performances and having a few njury problems which kept him out for months. in 2014, he was noticed when he consistantly started bowling between 145-150kph. The selectors immediately named him in the 2015 World Cup squad. After a decent campaign with Royal Challengers Bangalore in the 10th edition, he was named in the Champions Trophy squad. He will hope to enlist his name in the 2019 World Cup squad as well.