Recounting 2019's best memes and viral trends. You should not miss these

Here's a list of ten memes/stories that trended on the social media, and kept us entertained for days and weeks altogether.

The year 2019 was a stretch of time that had its own charm. From viral winks to 'How Dare Yous?', and bananas and oranges to lesser famous recipes of love and humanity, there trended stories and memes that made our 2019 worth remembering. Here's a list of ten such memes/stories that trended on the social media, and kept us entertained for days and weeks altogether.

1) The one where Rahul Bose went bananas

Bananas were the fruit of the season this year. Rahul Bose literally went bananas over....well...bananas.

Rahul Bose took to Twitter to share his sad story of paying Rs 442 for two bananas at a 5-star restaurant in Chandigarh. He went viral. And the rest was history.

You have to see this to believe it. Who said fruit wasn’t harmful to your existence? Ask the wonderful folks at @JWMarriottChd #goingbananas #howtogetfitandgobroke #potassiumforkings pic.twitter.com/SNJvecHvZB

2) The one where everyone went bananas

A Kela (banana) was never akela (alone ;)) the entire year. In fact, it was so suffocated with love that a man made an artwork out of it.

The banana, duct-taped to a wall, titled 'Comedian' was sold at a whopping $1,20,000 that roughly translates to Rs 85 lakh in Indian currency. CNN reported that it was installed by noted Italian artiste Muarizio Cattellan at Perrotin, a contemporary art gallery founded in Paris.

Now the love was such that David Datuna, a Georgian-born American artist living in New York, could not control his hunger. He ate it.

He, in a video posted on Instagram, walked up to the banana, pulled it off the wall and ate it.

A replacement banana was taped to the wall about 15 minutes after Datuna's stunt.

READ | Banana artwork, worth Rs 84 lakh, taped to a wall gets eaten

3) The one where Australia turned into a hot plate

It was so hot in Australia in December that a man cooked a pork roast in a car. No kidding here.

A man placed the slab of pork in a baking tin on the car seat of his red Datsun Sunny in Perth, Western Australia, for around 10 hours.

"It worked a treat!" Stu Pengelly said, in a Facebook post with pictures of the cooked meat cut into slices.

READ | Man cooks pork roast in his car. It's that hot in Australia!

4) The one with humanity

A picture of a little boy from Mizoram went viral after he rushed an injured chicken he ran over to the hospital. The six-year-old even offered to pay for the treatment with his pocket money. 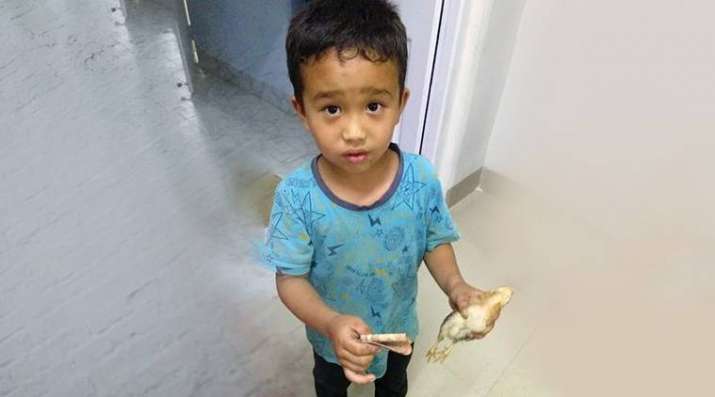 Derek C Lalchhanhima later received a ‘Word of Appreciation’ certificate from his school.

5) The one where we told stories

What would you tell your child if and when you actually have them? That's one deep question asking for introspection. And if you consider that they would believe whatever you tell them without a doubt makes the proposition even more tasteful.

READ FULL STORY | What are you 'gonna tell' your kids? Internet has ideas

6) The one with Yamraj

Okay. This one is not for the faint-hearted.

In order to create awareness among commuters, and save lives, Western Railways, already famous for their quirky ways, hired a Yamraj (God of death, according to Hindu mythology) to keep trespassers at bay. Not only this, when the Yamraj spotted a person in no-man area, he carried him on his back and landed him in a safer area.

As innovative as daring, the idea was a winner.

7) The one with alternatives

Inventions have changed the course of humanity -- so much so that one cannot think of a life without them.

But come to think of it, what would the world before the 1990s be doing where there was no internet? Twitterverse had the answer. And many such answers.

READ FULL STORY | What did people do before important things were invented? Twitter has a lot to say

8) The one with Greta Thunberg

Environmental activist Greta Thunberg trended on Twitter -- for hours on one day. All thanks to her histrionics at the United Nations.

The young Swedish activist furiously attacked world leaders at the United Nations for not doing enough to tackle climate change. She even berated the assembled delegates and asked them: “How dare you?”

And Greta (oh dear) later fixed her gaze on United States President Donald Trump as he arrived to attend a meeting on religious freedom. The moment was caught on camera and was widely circulated on the social media.

READ THE FULL STORY | Greta Thunberg is an internet sensation. Courtesy her UN speech and 'death stare' at Trump

9) The one where everybody said yes to all

A bizarre meme that took over the internet was a Windows' message box which allows users to say "yes" to all options -- that is, if you are faced with a dilemma to choose one among them.

The mighty internet, in 2019, gave weird recipes to the world. One was sweet maggie. The other was chocolate dosa, and the third was -- wait for it -- oranges with instant noodles.

Can we just stop this trend already? Or mango pizza is in the offing? (even the thought makes us puke)

READ | Remember 'Sweet Maggi'? Internet now has 'Chocolate Dosa'. And we have lost faith in humanity

MUST READ | In your daily dose of bizarre, internet has 'Sweet Maggi' recipe for you. And we register protest