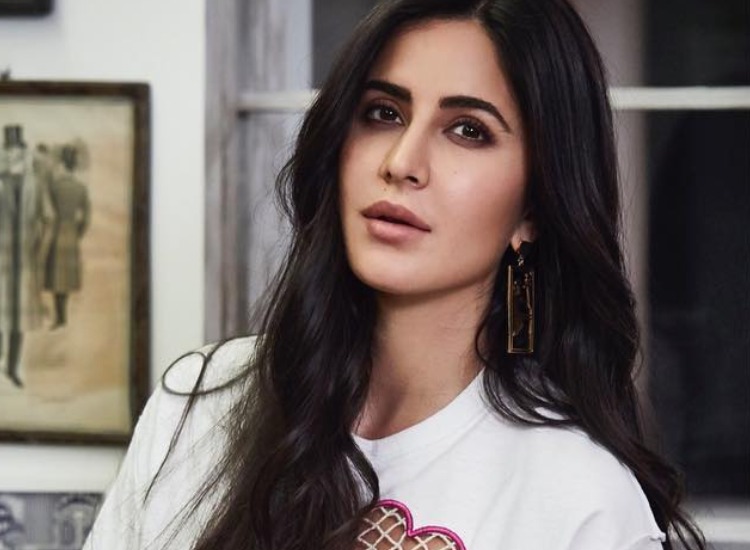 Born in Hong Kong, Katrina Kaif is a Bollywood actress who is known for her films like Tiger Zinda Hai, Ek Tha Tiger, Ajab Prem Ki Gazab Kahani etc. Katrina Kaif is one of the highest paid actresses in Bollywood and every filmmaker wishes to work with her. Her dancing skills have won her many praises.

Celebrity couple Katrina Kaif and Vicky Kaushal are back in Mumbai after their romantic getaway. The two were snapped at the airport walking hand-in-hand. The couple jetted off to an undisclosed location last week.

Actors Salman Khan and Katrina Kaif were clicked at the Mumbai airport as they returned to the city after wrapping up the 'Tiger 3' Delhi schedule. Emraan Hashmi, who is also starring in the movie, was captured at the airport too.

Fans wish to know what their favourite celebrities are up to every day. This is why we are here to bring forth what happened round and about in the city. Actress Deepika Padukone was spotted in the city after the release of her film Gehraiyaan. Meanwhile, superstar Salman Khan and Katrina Kaif headed out for the shooting of 'Tiger 3.' Just in case, you missed all the fun, here're are the pictures of the day!

Bollywood stars Katrina Kaif and Salman Khan were snapped at Mumbai's Kalina Airport on Tuesday (February 15). The duo jetted off to Delhi to shoot for the last schedule of Tiger 3. Before going inside the airport, both the actors waved at the paparazzi. This is the first time Salman and Katrina will be shooting together after the actress tied the knot with actor Vicky Kaushal in December last year.

The oversized hoodie is not just comfort clothing at its best but add to it a bit of style twist and all eyes will be on you. Katrina Kaif, Arjun Kapoor and Huma Qureshi show how to rock this easy-to-replicate look.

Newlywed Katrina Kaif was spotted at the Mumbai airport, late Friday night. The actress made heads turn in an all-black ensemble as she was seen arriving at Indore’s Devi Ahilyabai Holkar International Airport. Keeping her winter game strong, the actress opted to wear a black hoodie paired with matching leather pants and black sneakers.

Katrina Kaif and Vicky Kaushal make for one of the most adorable couples in Bollywood. The duo after tying the knot has been making heads turn with their unfiltered and cute PDA. On Saturday (January 1), Katrina was seen giving a warm hug to Vicky as she came to drop him at the Mumbai airport.

After much-wait Vicky Kaushal and Katrina Kaif finally tied the knot on December 9. Their intimate wedding ceremonies were attended by close friends and relatives. The celebration took place at Six Senses Fort Barwara in Sawai Madhopur yesterday after which the celebs were seen returning to Mumbai. The newlyweds made their first appearance as Mr and Mrs on Friday when they were clicked while boarding a helicopter. Just in case you missed the same on social media, here are the photos for you!

After Katrina Kaif and Vicky Kushal left for Rajasthan, many celebrities guests including Neha Dhupia, Angad Bedi, Kabir Khan and others were snapped at the airport on Tuesday morning. The celebrities were heading to Jaipur to attend the much-hyped wedding of this year. Although Vicky and Katrina have not officially announced their wedding, Vickat fans are convinced that the couple will be tying the knot in the coming days. As they reportedly prep up for their Sangeet ceremony today (December 7), the couple is expected to visit the famous Trinetra Ganesh Temple in Ranthambore fort, Rajasthan.

Rumoured couple Vicky Kaushal and Katrina Kaif were spotted arriving at Reshma Shetty’s office hours after a report of them tying the knot in December emerged. Reportedly, Vicky and Katrina are planning to take their relationship to the next level. On Tuesday (October 26) evening, the two were papped arriving in their respective cars to Bandra.

Lavender is the trending colour of the season. If you're looking for some styling inspirations take a cue from Katrina Kaif's wardrobe.

Bollywood actress Katrina Kaif is an avid social media user and often treats her fans by sharing stunning pictures and videos. Undoubtedly, Katrina manages to make heads turn with her stunning looks and fashion statements. As the actress celebrates her 38th birthday today, here’s a look at her beautiful pictures.

Of late, tie-dye outfits have become a rage among celebrities. If you love the trend, take inspiration from these Bollywood actresses for your next buy.

Bollywood actors Ranveer Singh and Zoya Akhtar were snapped outside director Zoya Akhtar’s house. There are speculations that Ranveer and Katrina will star in Zoya Akhtar's upcoming film. This will not be the first time, earlier Ranveer has worked with Zoya Akhtar in ‘Gully Boy’ and Dil Dhadakne Do. On the other hand, Katrina worked with the director in 'Zindagi Na Milegi Dobara’.

Many times Bollywood celebrities like Ranbir Kapoor, Janhvi Kapoor, Katrina Kaif, Sonal Chauhan, Ayushmann Khurrana have been spotted pedaling their cycles on the streets of the city. As we celebrate World Bicycle Day lets, take a look at the celebrities who picked up to cycling.

After staying home for several months, Bollywood celebs have finally started stepping out. And what is better than taking a trip to the Maldives? Yes, A lot of Bollywood celebs have been holidaying in the exotic location of Maldives. Lately, we saw the pictures of Taapsee Pannu, Varun Dhawan, Kajal Aggarwal, Tiger Shroff, Disha Patani, Tara Sutaria and many others enjoying the pool time. Take a look at their recent photos:

From actress Sonali Bendre Behl and her husband, filmmaker Goldie Behl, celebrating her anniversary, where they chose to go on a road trip or Baaghi 3 actor Tiger Shroff teasing fans with a photograph that shows him standing in a pool wearing yellow shorts or Malayalam star Prithviraj Sukumaran sharing a poem penned by his six-year-old daughter on the Covid-19 vaccine to newly wedded Kajal Aggarwal and Gautam Kitchlu honeymooning at a underwater resort, we on Thursday did the Instagram stalking to see whats happening around. See the pics here:

From saree to lehenga, birthday girl Katrina Kaif nails her ethnic looks with ease (In Pics)

Katrina Kaif is known for her being one of the most fashionable actresses of Bollywood. On her birthday, have a look at some of her amazing ethnic looks.

The hot favourite of Bigg Boss 13 was undoubtedly Shehnaaz Kaur Gill, who on the very first day of the show called herself 'Punjab ki Katrina Kaif' and left the host and superstar Salman Khan gushing. Her journey in the show has been a fruitful one as she won everyone's hearts with her cute and innocent nature. Her resemblance to the Bollywood actress has earned her the above-mentioned title. Here are some photos that prove the same!