With Djokovic being the overwhelming favourite in the encounter, while having a 5-2 head-to-head lead against the Greek, we take a look at how Tsitsipas can defeat the Kingslayer...

Just as what the draws implied, the summit clash of the 2021 French Open has boiled down to a battle of the generations, yet there is certain air of unfamiliarity at the Stade Roland Garros. Stefanos Tsitsipas was touted to reach the final from the second draw given his impressive clay season this summer. But the usual finalist, the 13-time French Open winner Rafael Nadal, won't be at the receiving end of the Greek's big serves on Sunday. The King of Clay was slayed in the epic semifinal clash on Friday at the Phillipe Chatrier by world no.1 Novak Djokovic as the Serb reached his 29th Grand Slam final.

Djokovic will be aiming for his 19th major, which will place him one behind Nadal and Roger Federer in the all-time list, and a second French Open title that will make him the first man in Open Era to win all majors twice. Tsitsipas, who required five set to go past Alexander Zverev in the first semifinal on Friday, will be playing his maiden Grand Slam final.

Masterpiece in Paris: How Djokovic pulled off 'the unthinkable' against Nadal in French Open

With Djokovic being the overwhelming favourite in the encounter, while having a 5-2 head-to-head lead against the Greek, we take a look at how Tsitsipas can defeat the Kingslayer...

Djokovic is arguably the best returner in the game, with the ability to neutralise the advantageous effect of the server. Tsitsipas needs to be at his absolute best during the serves. He is so far the best in terms of win percentage on both serves, with Djokovic standing second. In terms of second serve, Tsiptsipas has won 60 per cent of the points.

Tsitsipas can take a leaf out of Lorenzo Musetti, who had simply Djokovic his own medicine in the first two sets of the round of 16 tie earlier this week, before retiring with an injury. The Italian teen had won lesser points than Djokovic in the opening set, but it was first serve that held key, hitting six winners and forcing as many as seven errors from Djokovic. When serving into the Ad court, Musetti placed it wide off his backand and into his body when serving into the duece court which got him out of his comfort space. It was strategy he had applied during the 2020 French Open semifinal meeting during the third and the fourth set he had played. 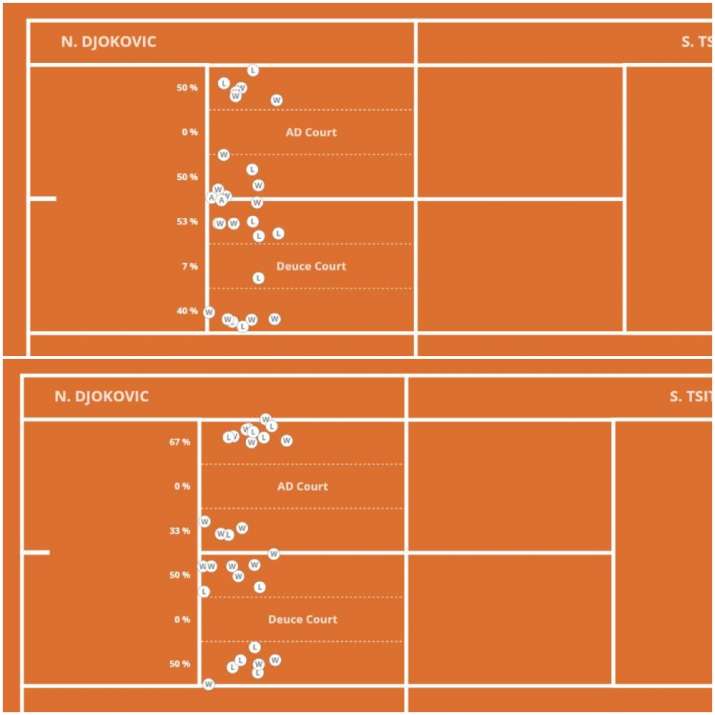 Musetti had won 44 points as against Djokovic's 47 in his 7-6 win in the first set of the last-16 tie. The difference lied in his game during the points that mattered. In fact, he outplayed The Serb in both the tie-breakers to go 2-0 up against Djokovic. Berretini too had managed to milk the crucial points in the third set against Djokovic in the quarters that boosted his confidence in pushing him to his limits in the fourth set.

Tsitsipas has won 77 per cent of the net points this edition, which indeed is quite impressive. Against Zverev in the semis, he won 24 of 33, or 73 per cent. In the final, he needs to come more often to the net and exert pressure on the Serb. From 60 per cent (6/10) in the first two sets in their only French Open meeting, Tsitsipas had improved to 70 per cent (10/14) in the third set which he had won.

The youngster also needs to dominate the mid-length and the longer rallies which has been a crucial figure in every Djokovic's wins. Ask Nadal, who managed failed to control the longer rallies in the three sets he lost, eventually resulting in his third Roland Garros defeat.