LJP leader Pashupati Kumar Paras has been unanimously elected as the party's parliamentary leader in the Lok Sabha.

The announcement came after LJP president Chirag Paswan visited uncle Pashupati's residence in Delhi, but left without meeting him.

The decision to elect Pashupati as the LJP's leader in the Lok Sabha was taken on Sunday during a meeting in Delhi. The meeting was attended by all the party MPs barring Chirag. The MPs later met Lok Sabha Speaker Om Birla to hand a letter to him about new developments. They urged Birla to consider Pashupati as the new leader of the LJP in Lok Sabha.

The LJP has 6 MPs in the Lok Sabha. They are Pashupati Paras, Price Raj (son of Pashupati), Chandan Singh, Veena Devi, Mehboob Ali Kaiser and Chirag Paswan. While Pashupati is a Lok Sabha MP from Hajipur, Chirag represents Jamui's seat. 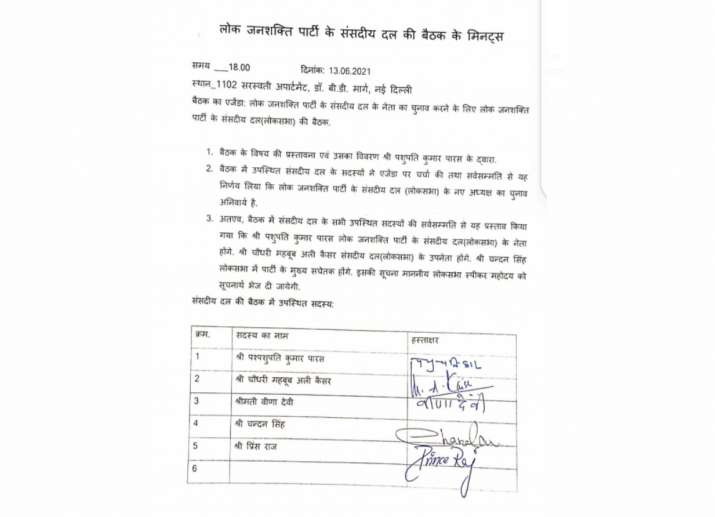 Earlier today, Pashupati lauded Bihar Chief Minister Nitish Kumar as a good leader and "vikas purush" (development-oriented man), highlighting the deep fault lines within the party as his nephew Chirag has been a strong critic of the JD(U) president.

"I have not broken the party but saved it," he said, adding that 99 per cent of LJP workers were unhappy with the turn of events in Bihar as Chirag led his party against the JD(U) and fared poorly in the 2020 assembly polls.

Pashupati said that his group will continue to be part of the BJP-led NDA. "Chirag Paswan can remain part of the organisation."