NCB arrested Aryan Khan on charges of consumption, sale, and purchase of narcotic drugs, after a rave party was busted aboard a luxury cruise liner. Amid the ongoing controversy, fans of Shah Rukh Khan have taken to the Twitter to extend support to his son.

Bollywood superstar Shah Rukh Khan's son Aryan Khan along with others were arrested by Narcotics Control Bureau on October 3 after a raid on a cruise ship in Mumbai. NCB arrested Aryan on charges of consumption, sale, and purchase of narcotic drugs, after a rave party was busted aboard a luxury cruise liner. On Monday, Esplanade Court in Mumbai sent the star kid, Arbaz Seth Merchant and Munmun Dhamecha in the custody of the NCB till October 7. Additional Chief Metropolitan Magistrate R M Nerlikar noted that the investigation in the case is of prime importance and considering this aspect, the presence of the accused before the NCB is necessary. Mumbai Drug Bust LIVE: Court extends NCB custody of Shah Rukh Khan's son Aryan Khan, 2 others till Oct 7

As per the agency, the three were booked under Section 8C, 20b, 27 (Punishment for consumption of any narcotic drug or psychotropic substance) and 35 (Presumption of culpable mental state) of the Narcotic Drugs and Psychotropic Substances Act. Amid the ongoing controversy, fans of King Khan have taken to the Twitter to extend support to Aryan Khan.

Not just this, fans gathered outside Shah Rukh Khan house to show their love and support to Aryan Khan. 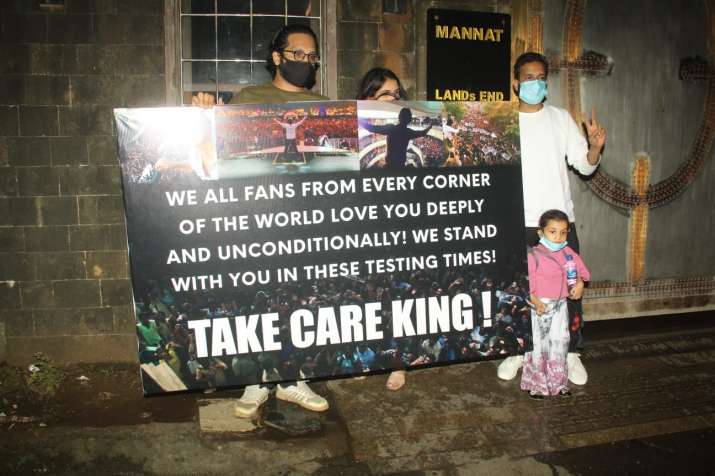 Meanwhile, the agency busted an alleged drugs party on the Cordelia Cruise ship which was on its way to Goa at mid-sea on Saturday night. Mumbai court sends Shah Rukh Khan's son Aryan Khan, 2 others to NCB custody till October 7

Six other accused - Nupur Satija, Ishmeet Chadha, Mohak Jaiswal, Gomit Chopra, Vikrant Chhokar and a drug supplier from suburban Juhu, were arrested late on Sunday and produced before the magistrate's court on Monday. The accused were produced before a Mumbai Court after their medical.

The arrest was made in connection with the seizure of 13 gms cocaine, 5 gms MD, 21 gms charas, and 22 pills of MDMA, totally worth Rs 1,33,000 from him. Aryan Khan, 23, acknowledged and said that he understood the grounds of his arrest and has informed his family of the same.