Shiv Sena-Congress-NCP government, led by Chief Minister Uddhav Thackeray, allocated portfolios for the recently sworn-in government on Thursday. Among the first who got ministries were Eknath Shinde from Shiv Sena, who has been made the home minister, Balasaheb Thorat from Congress, who is the new revenue minister, and Nationalist Congress Party's (NCP) Jayant Patil, who is the state's new finance minister.

Chhagan Bhujbal, the NCP heavyweight, has been given charges of rural development, social justice, water resources and state excise.

In addition to the Home Ministry, Eknath Shinde will helm Urban Development, Public Works Department, Environment and Tourism Ministries. He will also be Parliamentary Affairs Minister of the state.

Jayant Patil is back as Maharashtra's Finance Minister. In addition to this, charges of ministries like Housing, Food Supply and Labour has also been given to him. 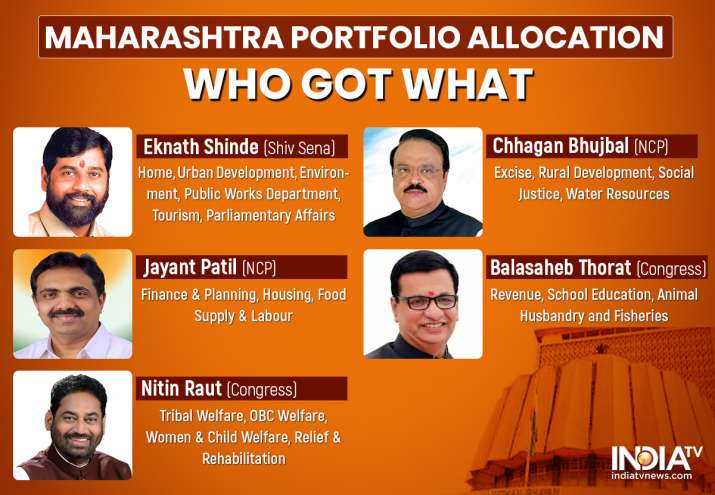 The process to allocate portfolios appeared delayed as there was no announcement after Uddhav Thackeray took charge as Maharashtra Chief Minister on November 28. The Opposition, especially former Maharashtra CM Devendra Fadnavis continuously criticised Thackeray government for the delay in allotting ministries. He had even raised question on the stability of the state government.

There has been no word as yet over the post of the DeputyCM. It is being said that NCP's Ajit Pawar is eager to assume the post. However, given his recent rebellion to side with the BJP, it is interesting to see how the situation progresses.

More announcements from the state government are expected about remaining ministries.

Watch | I am only answerable to my public, says Pankaja Munde on being asked about quitting BJP