Kangana Ranaut says 'let’s help each other, not bully' as multiplex chains refuse to screen Thalaivii

Kangana Ranaut is heartbroken as multiplex chains refuse to screen her film Thalaivii.

Bollywood actress Kangana Ranaut-starrer 'Thalaivii', based on the life of late Chief Minister of Tamil Nadu and former actress J. Jayalalithaa, is set to release in cinemas on September 10. The film will be released in Hindi, Tamil and Telugu. But things aren't going well with the actress as three national multiple chains seemingly decided to not accommodate the film. Heartbroken over the same, Kangana took to her Instagram handle and shared a message for the multiplex owners.

She wrote, "No films are choosing theatres, very few and very brave like my producers @vishnuinduri @shaaileshrsingh are compromising on huge profits and letting go off exclusive streaming options only for the love of cinema."

"In these times we must support each other and not bully or arm twist; it’s our fundamental right to recover the cost of our film which we did, we may have two weeks window for Hindi version but for South we have four weeks window yet multiplexes ganging up on us and stopping our release there as well…This is unfair and cruel in these testing times when major territories like Maharashtra are also shut…Please let’s help each other in order to save theatres," Kangana added. 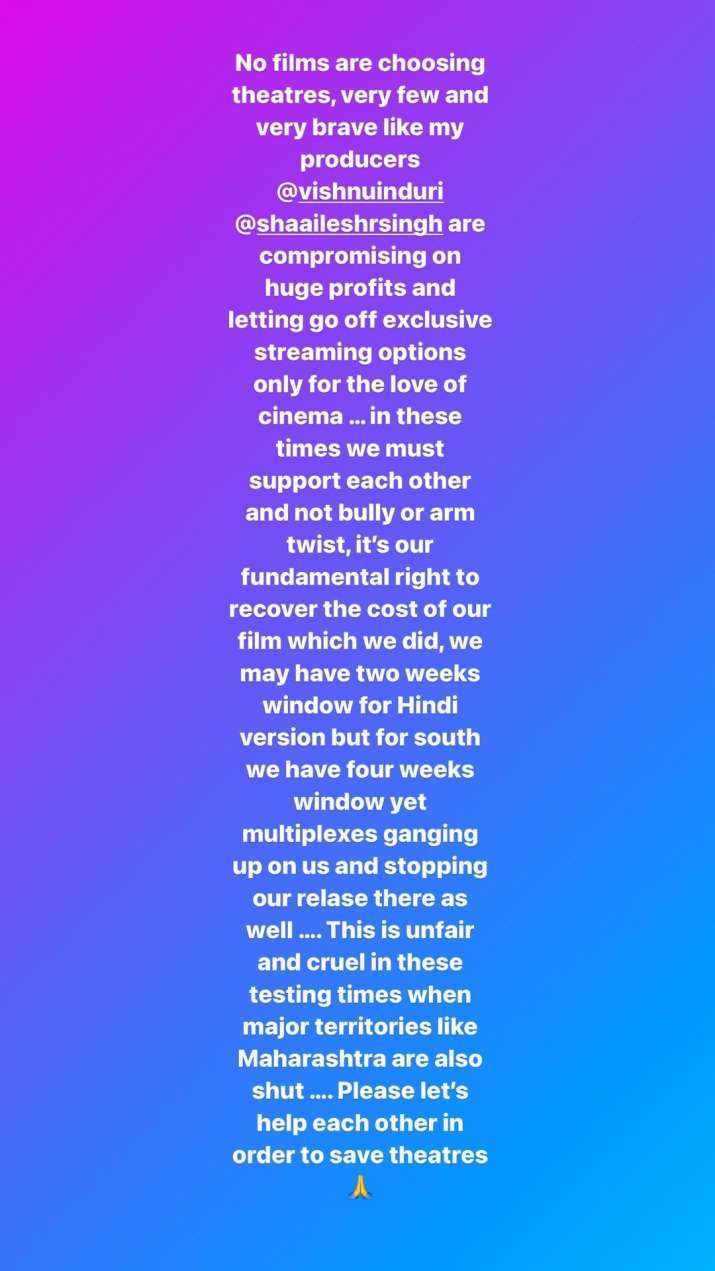 Based on the life of late Jayalalithaa, 'Thalaivii' showcases the varied aspects of her life, tracing her journey as an actress at a young age to becoming the face of Tamil cinema as well as the rise of the revolutionary leader that changed the course of Tamil Nadu politics.

'Thalaivii', presented by Vibri Motion pictures, Karma Media Entertainment and Zee Studios in association with Gothic Entertainment and Sprint films, has been produced by Vishnu Vardhan Induri and Shailesh R. Singh and co-produced by Hitesh Thakkar and Thirumal Reddy with Brinda Prasad as creative producer.

Meanwhile, on the professional front, apart from 'Thalaivii', Kangana also has films such as "Dhaakad", period drama "Manikarnika Returns: The Legend Of Didda" and "Tejas" in the pipeline. The actress will also don the Director's hat for the second time in film "Emergency", based on the life of late Indian Prime Minister Indira Gandhi.