Varun Dhawan's hilarious video of getting ready for Coolie No. 1 will leave you in splits

Directed by David Dhawan, Coolie No. 1 is the remake of 1995 Bollywood film with the same name that starred Govinda and Karisma Kapoor. In the film, Varun Dhawan will be seen romancing Sara Ali Khan.

Bollywood actor Varun Dhawan has been ruling the headlines these days. The actor has just wrapped up the shoot of his upcoming film Street Dancer 3D and it has already started preparing for his next film Coolie No. 1 remake. Directed by David Dhawan, Coolie No. 1 is the remake of 1995 Bollywood film with the same name that starred Govinda and Karisma Kapoor. Varun Dhawan, on Tuesday, took to his Instagram to share a hilarious video of himself as he stepped into the shoes of his character in the film and revealed how is he preparing for the role.

Varun Dhawan shared a funny video on Instagram in which he can be seen getting a shave for his role in the film Coolie No. 1 remake. In the video, the actor is seen sharing that he has to get rid of his beard for the role and during the process, he makes funny faces. Varun edited the video with funny sounds and faces that it will leave you rolling on the floor laughing. Watch the video here-

Do not take life too seriously. You will never get out of it alive-Elbert Hubbart. N joy karo bhai leaving for coolie no1 Video- @aalimhakim Edited- @sumit.baruah

Varun Dhawan and Sara Ali Khan starrer Coolie no. 1 is undoubtedly the most awaited film for the fans. Fans still enjoy the song ‘Main To Raste Se Jaa Raha Tha’ from the original film and dance like Govinda and Karisma. According to the reports, it is said that the remake of the film will also feature the new rendition of this song. A report in Mumbai Mirror stated that the makers have planned to bring in the hit song in the remake since remakes of hit songs are a flavour of the season. It is also said that popular composer Tanishq Bagchi will compose the newer version of the song and he has promised the director that he will keep the soul of the classic song while making the new one. 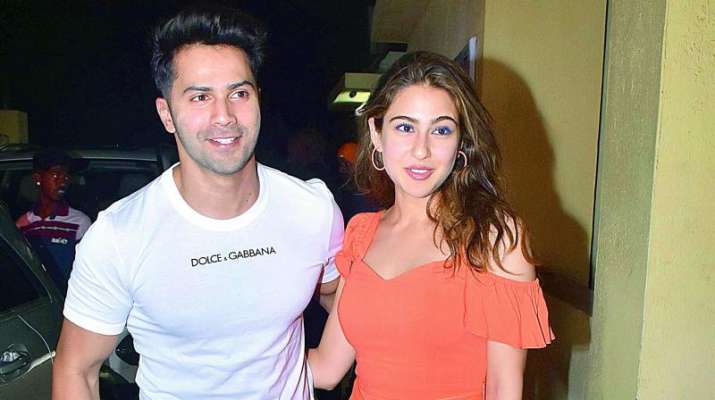 On the related note, not just Varun Dhawan and Sara Ali Khan, Coolie No. 1 remake also has a talented bunch of actors like Paresh Rawal, Rajpal Yadav and Johny Lever. Paresh rawal will be seen stepping into the shoes of Kader Khan from the original film.