Priyanka Chopra and Nick Jonas have shaken the internet with their gorgeous pictures and videos from their wedding at the royal Umaid Bhawan Palace in Jodhpur.

Priyanka Chopra and Nick Jonas have shaken the internet with their gorgeous pictures and videos from their wedding at the royal Umaid Bhawan Palace in Jodhpur on December 1 and 2. While the duo opted for designer Ralph and Lauren for their White wedding, it was Sabyasachi’s gorgeous outfits that made the couple look heavenly on their Hindu wedding day. The couple made their first appearance as husband and wife as they reached the capital city New Delhi for their wedding reception which will be attended by many dignitaries including PM Narendra Modi and Priyanka’s close friend and Hollywood actor Dwayne Johnson.

Prime Minister Narendra Modi led a high-profile crowd in congratulating newly-married couple actress Priyanka Chopra and American singer Nick Jonas at their reception. He arrived amid tight security to be a part of the special day of the actress, who first made India proud by winning the Miss World crown in 2000, and then became a leading Bollywood actress, followed by a rare successful crossover into Hollywood. The Prime Minister, who was escorted on stage by Priyanka's mother Madhu Chopra, was dressed in a white kurta-pyjama with a black Nehru jacket. He remained on stage for about 10 minutes, meeting Nick and Priyanka's families with folded hands and exchanging pleasantries.

Priyanka introduced her brother-in-law Joe Jonas and his to-be-wife, "Game Of Thrones" actress Sophie Turner, to him saying: "Inki bhi shaadi hone waali hai (They are also going to get married)." Check out teh pictures and videos here- 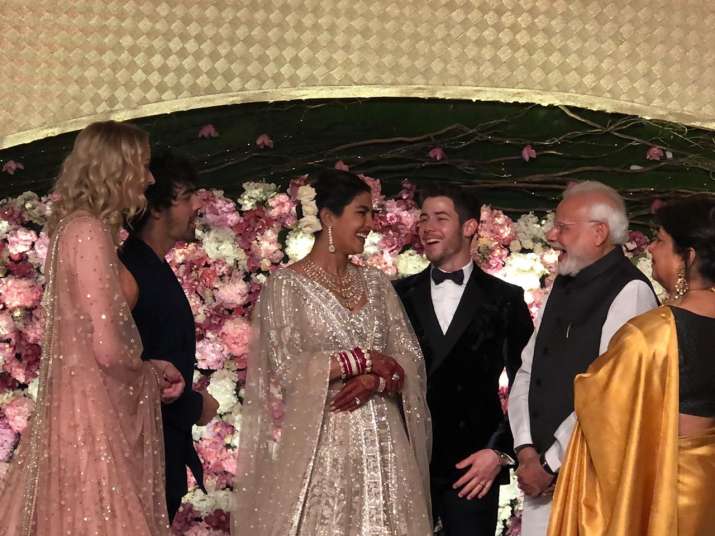 Here's a sneak peak from the couple's reception

Couple poses with family for a happy picture

While Priyanka Chopra and Nick Jonas look ravishing, the parents brigade look nothing but perfection. Priyanka's mother Madhu Chopra is seen sporting an elegant golden saree, on the other hand, Nick's father is dressed in a black suit and mother dons a gorgeous gown. Brother Joe Jonas and Sophie Turner also blow away our mind in their sizzling outfits. Sophie is seen dressed in a beautiful pastel coloured lehenga paired with soft curls. Have a look- 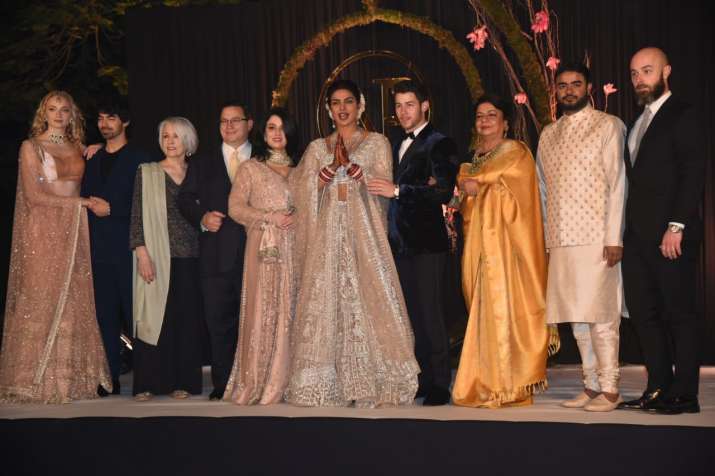 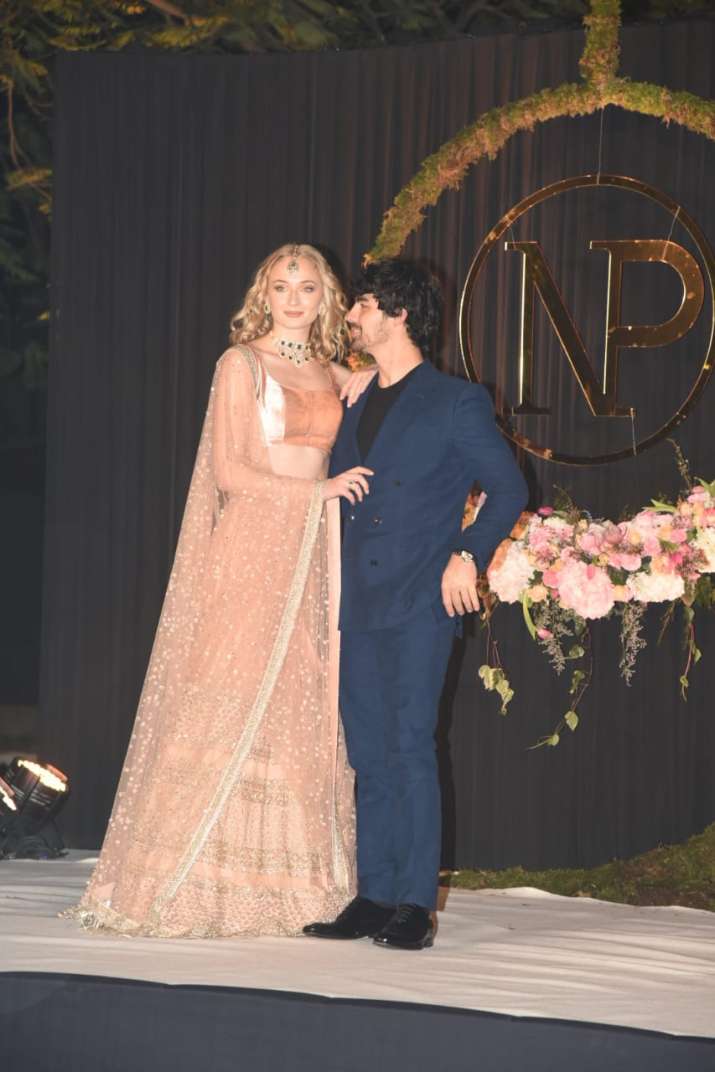 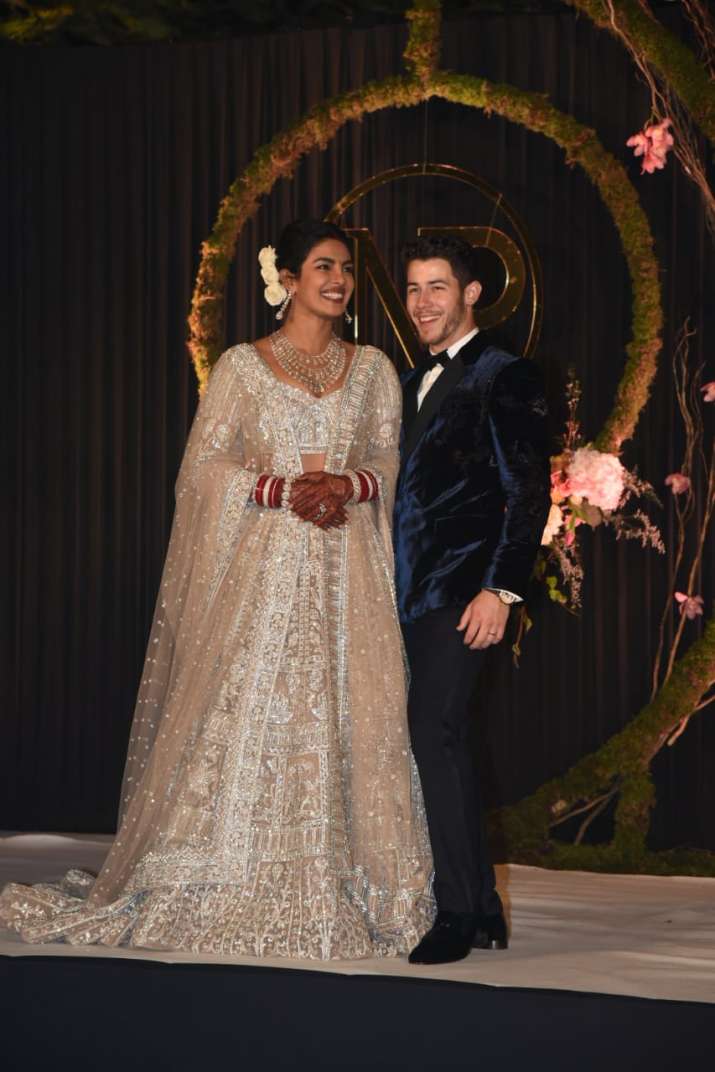 Priyanka Chopra and Nick Jonas make a splashing entry at their reception venue. Priyanka dazzles in an elegant white bejewelled ensemble by designer duo Falguni Shane and Peacock with a multi-layered diamond necklace and earrings, with her hair neatly tied in a bun complete with white roses. She flaunts the "chopra" -- traditional red bangles worn by a Punjabi bride -- and sports vermillion. Nick is dressed in a velvet dinner jacket and completed the look with a bow tie. The family joins the couple looking every bit of ravishing. 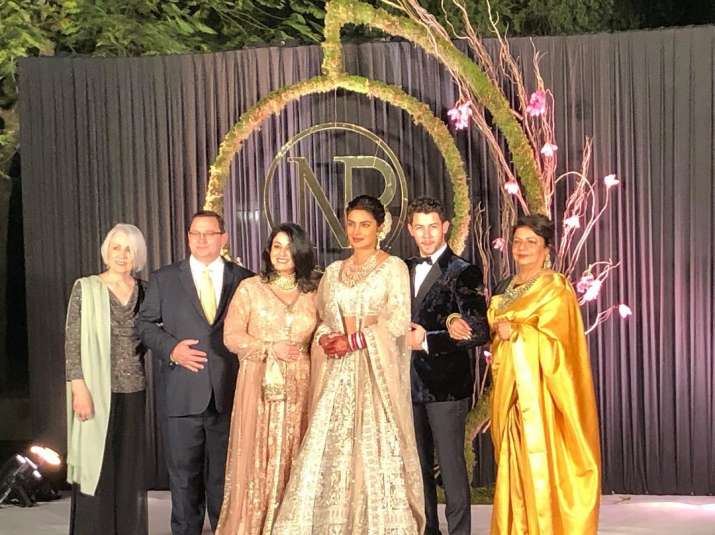 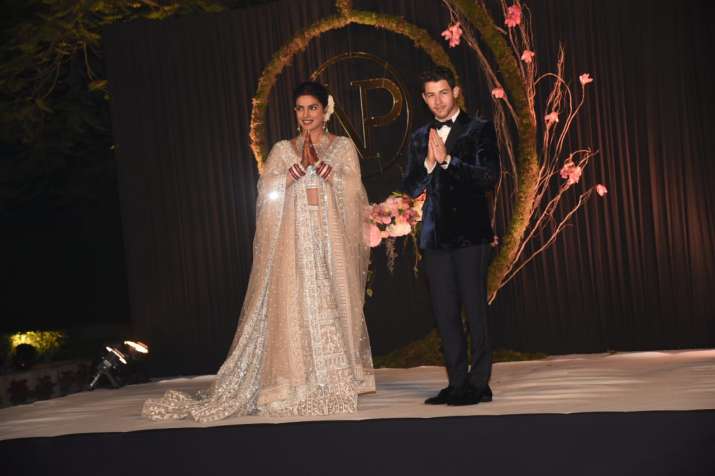 Stage is set for the couple

Priyanka and Nick Jonas' Delhi reception is being held at the Darbar Hall, Taj Palace and it is decorated beautifully with flowers and lights. The venue also has the couple's initials elegantly decorated on the stage. Have a look at it here. 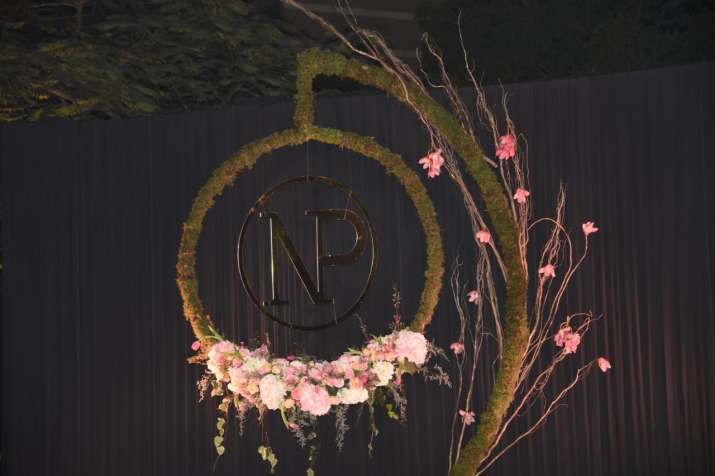 The Delhi reception invite has already surfaced the internet and looks every bit of royal.

Priyanka Chopra and Nick Jonas made the most beautiful bride and groom as they got married at the royal Umaid Bhawan Palace in Jodhpur on December 1 and 2. The duo have finally unveiled their wedding pictures and all we can say is that the lovestruck couple redefines love in each and every frame. According to the people.com, Priyanka’s look was custom made by fashion designer Sabyasachi Mukherjee. It reportedly took 110 embroiders from Calcutta to help make the bride’s wedding attire. “For the Indian wedding, I wore Sabyasachi. I always knew I wanted a red traditional silhouette for my wedding but Sabya brought in incredible French embroidery to the mix and with incredible jewelry and Western-inspired veil it was just such an amalgamation of who I am,” Priyanka Chopra told people.com.

An emotional Priyanka Chopra, who carried a bouquet of hyacinths and tuberoses designed by Jenya Flowers (NYC) at her White wedding, said, “I could not hold it in. I think I was nervous and scared. But as soon as the curtains opened, and I saw his face it was just like everything settled and I knew I was making the best decision of my life.” We are already blown away by the couple's beautiful attires. The actress wore a hand-beaded and hand-embroidered dress featuring floral and scroll motifs, lace-effect tulle appliqués, scalloped sleeves and a high-neck collar for her Christian wedding. The embroidery took a total of 1,826 hours to complete, according to the brand.

The couple landed in Delhi in style

Priyanka Chopra and Nick Jonas made their first appearance as a married couple at Jodhpur Airport when they were leaving for Delhi. The duo looked absolutely stunning walking hand-in hand at the airport. While Nick Jonas sported a casually cool look, Priyanka looked like a diva in her gorgeous green saree. However, what stole away our hearts was her heart shaped diamond Mangalsutra. 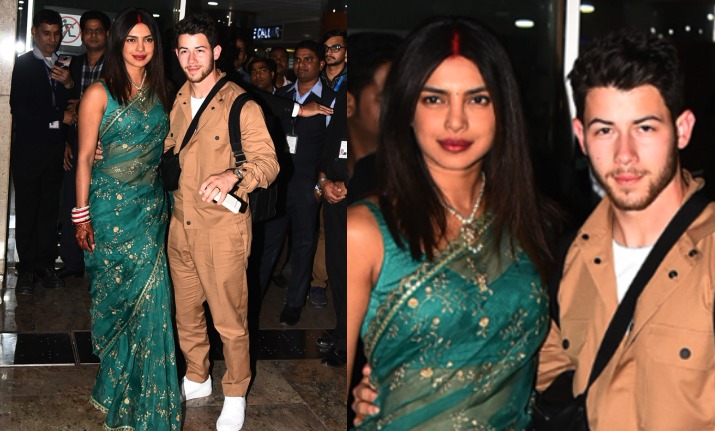 The couple shared moments from their Sangeet and Mehendi ceremonies and fans went crazy over them. The pre-wedding festivities took place in Jodhpur and the couple even organized a friendly cricket match for the bride and the groom's side.

One of the most special things that our relationship has given us is a merging of families who love and respect each other's faiths and cultures. And so planning our wedding with an amalgamation of both was so so amazing. An important part of the pre wedding rituals for the girl in an Indian wedding is the Mehendi. Once again we made it our own and it was an afternoon that kicked off the celebrations in the way we both dreamed. @nickjonas

It all began as a fierce song & dance competition between the families but ended, as always, as a huge celebration of love.  Nick and I were looking forward to the Sangeet (musical evening), another pre wedding ritual.. and to see what each side had put together. And what a performance it was. Each family telling our stories through song and dance, filled with lots of laughter and love. We were both filled with gratitude for the effort, the love and the laughter and will carry the memories of this special evening for the rest of our lives. It is an amazing start to a lifetime of togetherness for our families and friends...#grateful @nickjonas 📹/📷: @calebjordanlee @josevilla @josephradhik

FIRST PICTURES, VIDEOS! Priyanka Chopra and Nick Jonas' wedding is out of a fairytale