Stargazers, are you ready? January 31 has brought a lot of excitement among those interested in celestial events. On Wednesday, supermoon will coincide with total lunar eclipse and blue moon. The phenomenon is known as super blue blood moon. It is the first such rare show by moon since 1982 in Asia. In case you are confused what is super blue blood moon, then let us clear all your doubts.

Supermoon occurs when the Moon is at its closest point to the Earth in its orbit, known as perigee. Moon appear 14 percent brighter than usual. Second full moon in a month is known as blue moon. During total lunar eclipse. the Earth will cast a shadow on the Moon which will give it a reddish tint, known as blood moon.

Earth to witness the largest and brightest 'supermoon' today! All you need to know

Skywatchers in for treat as ‘supermoon’ to brighten up skies tonight

Get ready for a rare sight- Supermoon, blue moon and lunar eclipse, all on 31st January

After two full moons in January, there will be no full moon in the month of February. The next one known as Worm Moon will happen on March 1. There are many myths related to lunar events such as eclipse. However, a study has established a connection between sleep pattern and full moon. The study suggests that people have an average of 20 minutes less sleep around the time of full moon, as compared to new moon. Researchers also found that participants took five minutes longer to fall asleep during full moon than around new moon. 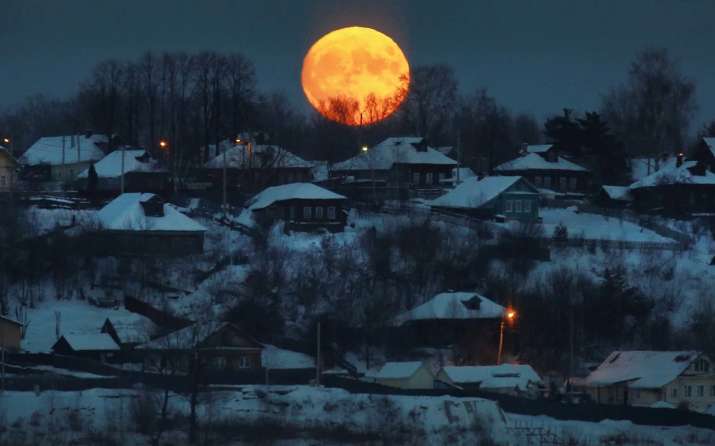 When can we see super blue blood moon?

In India, super blue blood moon can be seen from 6:21 pm to 7:37 pm. The phenomenon will begin from 4:21 pm and after total eclipse, partial eclipse will end at 8:41 pm. The total duration of the eclipse is 1 hour and 16 minutes, according to express.co.uk.

North-east India can see the partial eclipse from 4:21 pm to 5:18 pm. Majority of the country will be able to see the eclipse during the above time frame. In west, people can see super blue blood moon between 6:21 pm to 7:37 pm.

Also, the rising moon will appear more reddish than usual.  Lunar eclipses can be best seen through naked eyes. You can have a better view at high altitude area away from city pollution.The next total lunar eclipse in India will be seen on July 27, 2018.

Many South American and African countries including those in west Europe won't be able to see the eclipse as it will take place during daylight.

Besides enjoying the triple treat with naked eyes from your terrace and balcony, you can watch the live feed by NASA on its website from 4 pm. Nehru Planetarium at the Nehru Memorial Museum and Library is organising an event, "A moonrise in Eclipse!", from 6.30 p.m.-9 p.m. on Wednesday. Also, SPACE India, a start-up focused on astronomy education and astro-tourism services, said it would also organise events to observe the phenomenon from 6p.m.-9.30 p.m. at various locations across India, including at India Gate.

Here's the link to live feed from NASA