Released in 2004, Main Hoon Na was one of Shah Rukh Khan's hit blockbuster film. After 17 years, a newspaper clipping from the film has surfaced on the internet which left netizens in splits.

Released in 2004, Main Hoon Na was one of Shah Rukh Khan's hit blockbuster film. Directed by Farah Khan Kunder, the film also starred Sushmita Sen, Zayed Khan, Sunil Shetty and Amrita Rao among others. After 17 years, a newspaper clipping from the film has surfaced on the internet which left netizens in splits.

The newspaper clip is related to Army officer Raghavan Dutta played by Sunil Shetty. The hilarious content seen in it, which was supposed to be an article about the death of Shetty’s character, who played the role of the villain in the film has been g4rabbing eyeballs.

The text reads: “I seriously don’t know why I am typing this because no one is going to be able to read this through the camera, but I guess I have no choice. You see the thing is the colours don’t seem to match so I basically have to type this whole thing out. I am thinking of handing over this honourable job to two hardworking colleagues, Vikram Gupta and Vaibhav Misra.”

For the unversed, this clip appeared as a part of the end credits in a song titled ‘Yeh Fizayein’, in which the entire cast came together to dance.

Interestingly, we finally know who the person behind the article is. It was Vishal Punjabi, Founder, The Wedding Filmer. 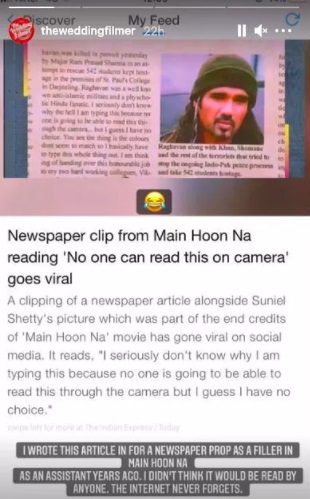 The viral clip is a feist to the netizens. Check it out here:

Also read: Shein returns to India on Amazon Prime Day 2021: No wonder Netizens are having a field day!