There have been rumours that after quitting his long-running TV show Yeh Rishta Kya Kehlata Hai, Mohsin Khan will enter Bigg Boss 15 and will show his real personality to his fans. However, on Saturday, he took to Instagram to shut the rumours and said that he is too shy for the show.

Superstar Salman Khan hosted Bigg Boss 15 is all set to premiere on TV in the first week of October. There are many celebrities whose names have been going viral on the internet who are likely to participate in the reality show. One name that has left the fans excited is Mohsin Khan of Yeh Rishta Kya Kehlata Hai fame. There have been rumours that after quitting his long-running TV show, Mohsin will enter BB15 and show his real personality to his fans. However, on Saturday, he took to Instagram to shut the rumours and said that he is too shy to enter the show.

Mohsin Khan shared a picture of himself and wrote in his Instagram stories, "All the rumours of me joining Bigg Boss are not true. Yaar I am too shy for it. Wishing everyone all the best and a blessed weekend ahead Inshallaah." 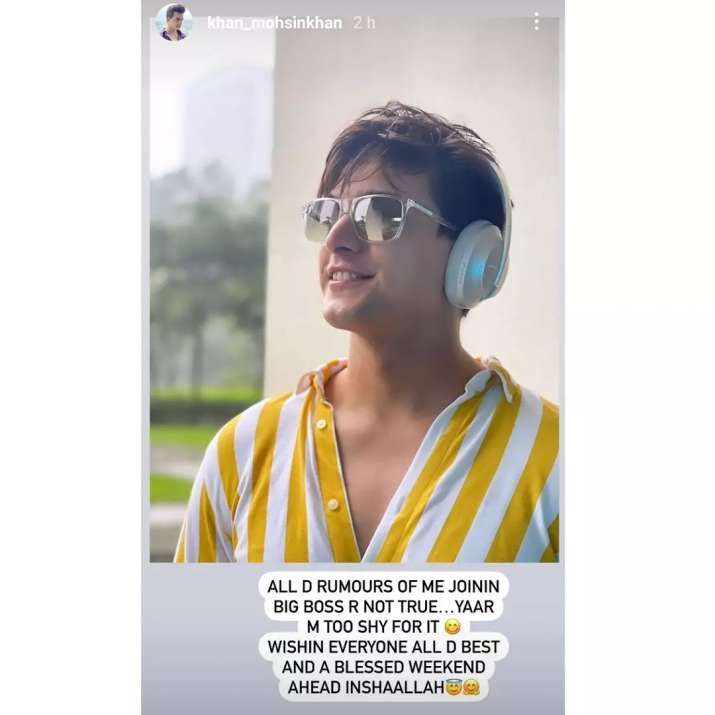 Mohsin Khan has been in the news lately for his exit from the show Yeh Rishta Kya Kehlata Hai. The actor, along with his leading lady Shivangi Joshi, has decided to quit the show. A report in Spotboye claimed, "Shivangi and Mohsin will be making an exit from the show by October first week and new actors will join in. The makers have already done a lot of experiments with their characters and now, want to start a new storyline. Hence, the decision has been made."

Reportedly, Mohsin Khan has decided to quit the show because of another generation leap and he doesn't want to play an older character. The reason for Shivangi is said to be the same. Fans flooded the internet expressing their disappointment about the same after the rumours spread. #NoShivinNoYRKKH trends started ruling.