Starring late actor Sushant Singh Rajput and popular model Sanjana Sanghi, Dil Bechara is the official Hindi adaptation of Hollywood film Fault In Our Stars, which is based on John Green's bestselling young adult novel by the same name. Directed by Mukesh Chhabra, the film's trailer has become the most liked trailer on YouTube within 24-hours, beating Avengers Endgame.

Late actor Sushant Singh Rajput's last film Dil Bechara is all set to release worldwide on OTT platform Disney Plus Hotstar on July 24. The makers dropped the trailer of the film on Monday and it instantly earned appreciation from the viewers. Fans were thrilled as well as emotional to watch the actor on their screens and wished he would just come back somehow. In less the 24-hours, the trailer has received a heartwarming response as fans have been working to make it the most-viewed trailer ever. While there is still time for that, Dil Bechara trailer became the most liked trailer ever within 24-hours, beating Marvel's most popular film Avengers Endgame trailer.

Starring Sushant Singh Rajput and popular model Sanjana Sanghi, Dil Bechara trailer has earned 4.4 million likes at the time of writing and more than 21 million views on YouTube. On the other hand, Avengers Endgame's first and second trailers have 3.2 and 2.9 million likes respectively. Sushant's otherworldly charm and innocent acting have worked its magic yet again. The trailer crossed 5 million views within one hour of the release itself. 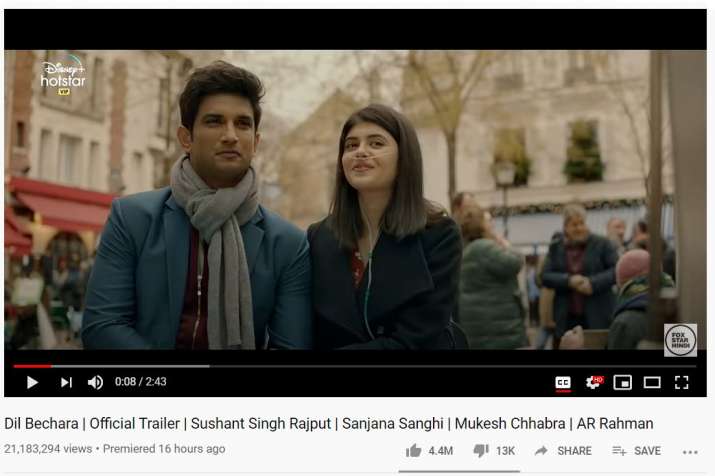 While it has become the most liked trailer, fans as well as Bollywood celebrities have been urging to make it the Most Viewed trailer as well on YouTube. Actors like Priyanka Chopra, Anushka Sharma, Sara Ali Khan, Rajkummar Rao and others shared the trailer of Sushant's Dil Bechara on their respective social media handles on Monday and were all praise for it. Actor Vidyut Jammwal even shared a video urging his fans to watch the trailer and pay a tribute to the late actor.

Sharing the trailer of the film, Sushant's co-star Sanjana Sanghi wrote, "He was the one who healed her, and took away her pain by celebrating each and every little moment that mattered. We miss you so much, Sushant. Thank you, for all your love, the memories, the laughter and films."

On the other hand, Mukesh Chhabra, who is making his directorial debut with the film, said, "Finally after such a long wait, 2 years of my life. So many friendships close to my heart,so many ups and downs, happy and sad moments. Presenting to you our dream and the dream of my brother Sushant, who will live on in me till my last breath. The trailer of my debut film #DilBechara. So much has changed in my life these past years and I will always cherish every single moment. Putting the trailer out there in your hands and in your hearts. It's over to you now. For every single one of you to watch from your home as many times as you like, I'm glad it's free for everyone, without any subscription, so every single person in India can watch it. So many mixed emotions. I urge you to watch it with your family, friends, girlfriend, boyfriend, loved ones. For you to celebrate a life that lived and will forever be in our hearts. Love to everyone"

Dil Bechara is the official Hindi adaptation of Hollywood film Fault In Our Stars, which is based on John Green's bestselling young adult novel by the same name. In the film, Sanjana Sanghi is seen playing the role of Kizie Basu who is battling cancer, while Sushant Singh Rajput plays Manny, who is a cancer survivor and lives his life to the fullest.