Kaalakandi Movie Review: Akshat Verma's film is all about finding calm in lunacy

Saif Ali Khan is living up to his experimental image to the fullest. The actor is back on the silverscreen in less than a year with a totally different role to serve. After playing a family man in Rajakrishna Menon’s Chef, Saif Ali Khan essays a madcap in Akshat Verma’s Kaalakaandi. Releasing on January 12, Kaalakandi offers you a lunatic ride into the world of dark comedy, the genre which still remains untouched in Indian cinema. Relive the Mumbai rains like never before in Akshat Verma’s psychedelic fanfare.

Kaalakaandi depicts the intersection of lives of some Mumbaikars on a crossroad, with one breathing his last. The film gives a picture of life, death and karma, and also everything in between them.  A man (Saif Ali Khan), who has never touched alcohol or tobacco in his life, is suddenly rewarded with life-threatening stomach cancer. Knowing that the saint life he has always lived is going to end in just a span of month, he flips drastically, and trying everything he hasn’t yet. In a time of just one month, he lives the life, he has been secretly craving to live. Drugs, playing around with cops, kissing a random stranger at a wedding and what not, he lives it all just to slip out obliviously from this world.

Before telling our reader if the movie managed to impress, let us tell you what the literal meaning of Kaalakaandi is. Kaalakaandi is the Marathi sland which means ‘when everything goes disastrously wrong’. This is what happens in Saif Ali Khan’s life when he learns that he just has a month to live. Lives of six Mumbaikaars, who are not even remotely related to each other, are entwined together. It brings them on a crossroad wherein an accident in one’s live results in a mayhem in another’s. 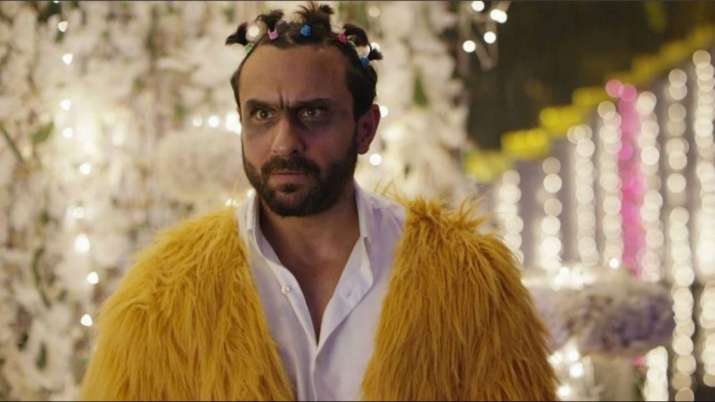 The best thing about the film which I would like to point out is that; the audience will find a sense of calmness amid this madcap affair. There’s sanity in the insanity, as its real. Taking a shot of psychotropic drug, Saif Ali Khan embarks on a wingless flight which opens the door of possibilities which he never saw before. He sportingly jumps into every adventure, right from peeking at a transgender’s private parts in a ‘ladies washroom’ to almost pushing his brother to call off his wedding. On the other hand, a woman (Sobhita Dhulipala) with bright future in the States,  finds herself in a police raid and ends up knocking a gangster dead. The moment where she misses her flight just to admit her crime to Mumbai Police, we’re reminded of a government advisory, asking people to not drink and drive. Now come the thunder-stealers; the magnificent duo (Deepak Dobriyal and Vijay Raaz) of two mafias, working under an underworld kingpin. Their aspirations to become instantly rich makes one of them kill the other. And FYI, we should be thanking Akshat Verma for bringing such an outstanding ensemble of star cast under one roof. It’s difficult for cinephiles to say which among Saif Ali Khan, Vijay Raaz and Deepak Dobriyal was the hero of the movie. 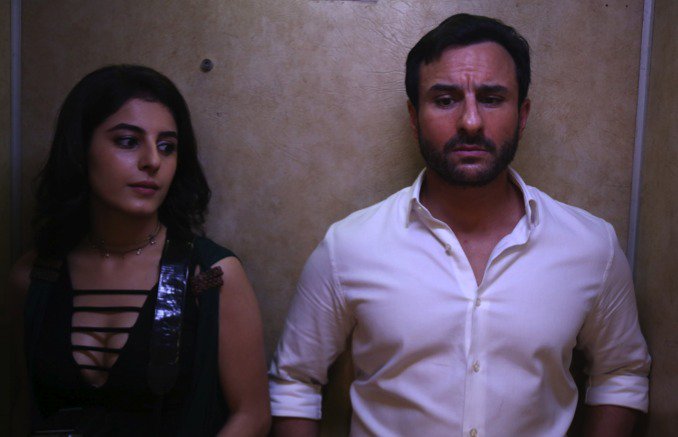 The edge-of-the-seat dark humour and the short runtime are the two reasons why you’ll find yourself hooked to the screens. At one point you see Saif Ali Khan finding of his illness and at the other, he runs amok on the streets of Mumbai, popping a pill. Had it not been for the pace of this Akshat Verma-directorial, there could’ve been many points in the film where we could’ve suggested a fast forward. The facts that Kaalakaandi is outrageously humorous yet utterly sensitive, is another brownie point for the film. The meaningless yet sweet conversations between Saif Ali Khan and his transgender partner in crime, Sheela are the parts of the film which will make you laugh and ponder at the same time.

So in Kaalakaandi, when things ‘disastrously’ go south, everything starts making sense. Akshat Verma makes a fantastic entry into direction and we’re looking forward to more such films like Kaalakaandi. Go watch Kaalakaandi if you’re craving for dark humour in Indian cinema. But there’s a disclaimer, don’t try to find gumption in the film. It’s all psychedelic!