Malaika Arora and Arjun Kapoor are rumoured to be dating for a while now. Though, they've never accepted their relationship but their frequent public appearances add fuel to the fire.

Malaika Arora and Arjun Kapoor are the next big couple of Bollywood. After keeping it under wraps for a long time, the lovebirds have finally started dropping hints about their relationship status. After walking hand in hand at Italy airport, Malaika and Arjun are slowly upping their social media PDA game. On the occasion of Halloween, Arjun Kapoor shared a fan-made picture of himself in a spooky avatar. Instead of finding it scary, beau Malaika Arora found it really hot, at least that’s what her comment means.

Happy Halloween !!! Just an excuse to post this really cool edit made by @arjunkusafc love it !!! #halloween 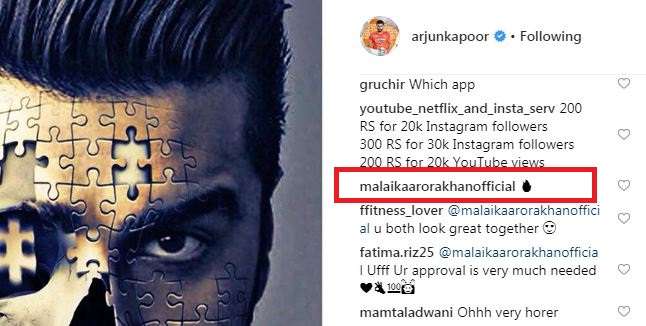 Malaika Arora and Arjun Kapoor are rumoured to be dating for a while now. Although, they never spoke openly about their relationship status, their frequent public appearance together on several occasion have spoken more than required. In fact, Arjun Kapoor accompanied Malaika to Italy to ring in her 45th birthday.

A Filmfare report recently claimed that Arjun Kapoor and Malaika Arora are tying the knot next year. However, a close friend of the actress shunned the reports and denied all such speculations about their marriage. However, the friend did reveal their relationship status saying that they are still exploring their ‘beautiful relationship’.

Malaika Arora was previously married to Arbaaz Khan since 1998. They announced their separation in 2016 and finally divorced last year. Arbaaz Khan, on the other hand, is dating a model named Giorgio Adriani. While Malaika has kept her relationship under wraps, Arbaaz has come up openly about his love life. In fact, the duo is spotted together on dinner dates a number of times.