You gotta keep moving: Masaba Gupta runs on treadmill after being misdiagnosed with slip disc

Masaba Gupta runs on a treadmill after being misdiagnosed with a Slip Disc; Tells Fans 'You Gotta Keep Moving'

Bollywood's ace designer Masaba Gupta is an inspiration for many of us, reveals her latest post. The designer recently took to her Instagram stories and shared a picture of herself running on a treadmill, wherein she could be seen sporting a black sports bra and shorts. Posting the picture, Masaba recalls the time she had spent over a month in immense pain in her back. Even being misdiagnosed with a slip disc, she is recovering and feeling great. She said one has to keep moving.

She motivated her fans and followers by saying that it might be an easy thing to lay on bed and sulk but one has to keep moving. "I've spent over a month and a half in immense pain in my lower back, gone to 4 doctors and even been misdiagnosed with a slip disc. But I'm good - recovering well - I was scared of getting onto a treadmill after a long strength session...but I did and it felt great!!! It was so easy to lie in bed and sulk but you have to keep moving!!! You gotta keep moving however slow it is. I continue to be pescatarian and enjoy both healthy and unhealthy foods in balance," Masaba captioned the picture. 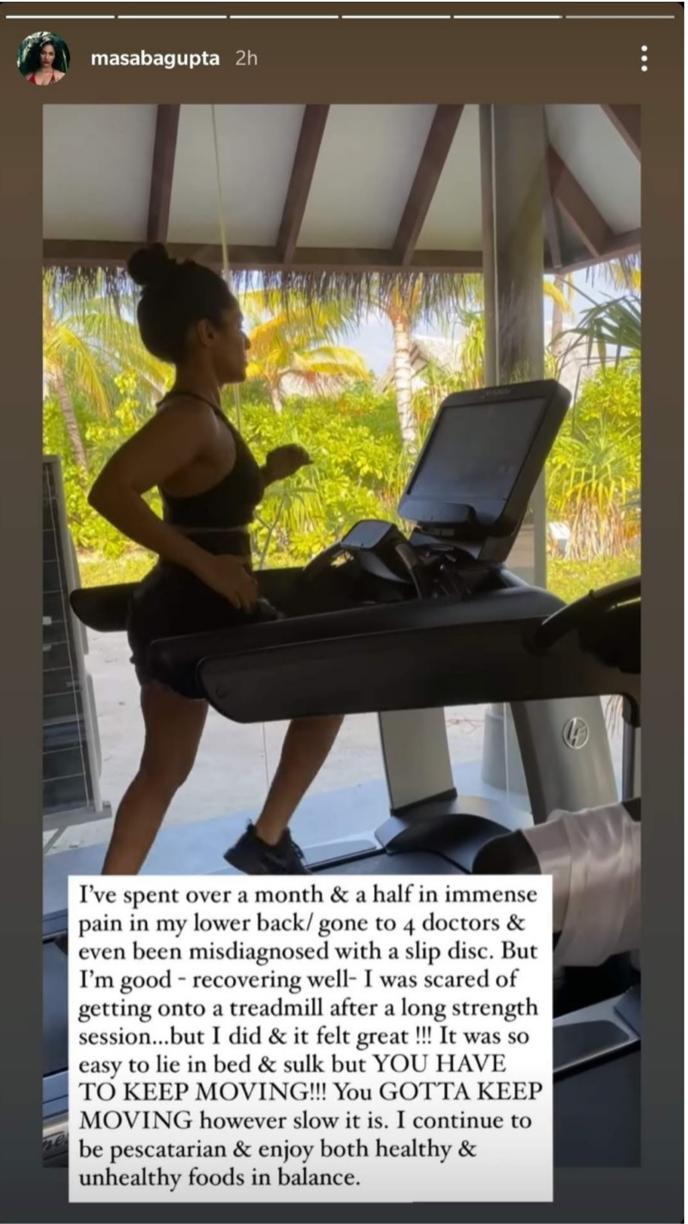 Meanwhile, actor Neena Gupta's daughter Masaba served her fans with some interesting photos from her Maldives vacation. The designer is also sharing some amazing snaps straight from the island and we can't stop gushing over it. She was staying at a luxury resort in Maldives - Heritance Aarah - situated on a secluded island.

Masaba Gupta even released her new show, Masaba Masaba which shows the chronicles of her journey as a designer and as a woman.