Tiger Shroff has praised his idol Hrithik Roshan, when a fan questioned the action hero about who among the two is a better dancer.

One won hearts with his brilliant dance moves in songs Ek Pal Ka Jeena, Bang Bang and Main Aisa Kyun Hun among others; another got a loud shout out when he danced to peppy beats of Befikra and SOTY 2's The Jawaani Song. If you haven't guessed it by now, we're talking about Hrithik Roshan and Tiger Shroff. The two actors are always a treat to watch and their camaraderie is just adorable. However, their fans often wonder who's a better dancer between them. Putting this debate to rest, Tiger recently answered the question.

Tiger recently interacted with his fans on social media with a question and answer session. An Instagram user asked him: "Who is the better dancer, you or Hrithik Roshan sir?" Pat came the reply: "@hrithikroshan hands down ba**s to the floor is way better."  Tiger even shared a behind-the-scene video from the song 'Jai Jai Shiv Shankar' from their film 'War'. 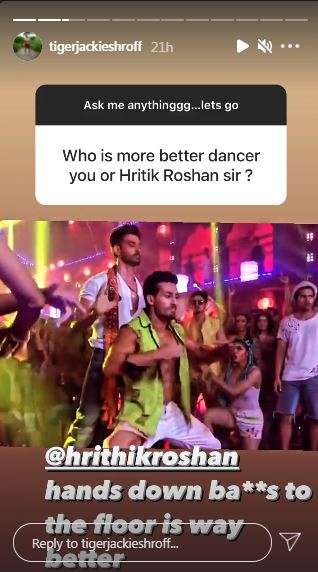 Tiger later shared a video of him on the photo-sharing website doing somersaults into the bed. "Quarantine diaries...day 4. And no im not crazy...yet," he wrote as the caption for the video, which currently has 1.9 million views.

For the unversed, Tiger Shroff and Hrithik Roshan have shared the screen space in 2019 film War. It is an action-thriller directed by Siddharth Anand features Hrithik and Tiger in lead roles. Vaani Kapoor also stars in the film as a female lead. The film gained rave reviews from the audience and critics alike particularly for its intriguing action sequences, chase scenes, picturesque locations and two leads who'd do anything to pull you into their world.

On the work front, Tiger has a big list of films coming up. He will be seen in the Ahmed Khan directorial 'Heropanti 2', 'Ganapath' and 'Baaghi 4'. According to reports, Tiger is gearing up for an overseas shoot schedule for 'Heropanti 2' from September 10.

Hrithik, on the other, is currently prepping for his next 'Fighter' which also stars Deepika Padukone. 'Fighter' will be India's first-ever aerial action genre film. Directed by Siddharth Anand, the film will be shot using the latest technology and filming techniques, and at locations across the world. 'Fighter' is slated for release in 2022.