Veteran actress Tanuja turned 78 on Thursday. To mark her birthday her daughters Kajol and Tanisha posted some adorable videos on social media.

Veteran actress Tanuja turned 78 on Thursday. To mark her birthday her daughters Kajol and Tanishaa Mukerji posted some special videos of their mom on social media. Taking to her Instagram stories, Tanisha shared a short clip of Tanuja sitting in her night suit on a sofa. She added, 'Hey Birthday girl' on the video. 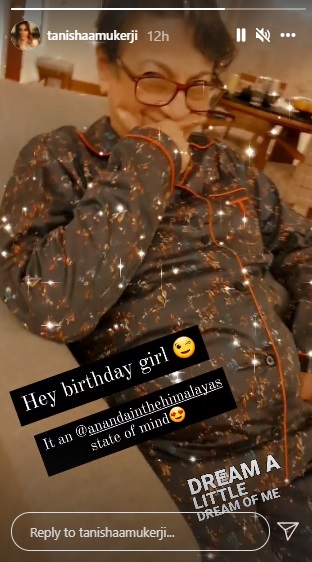 Tanuja is all smiles as she gets clicked by her daughter.

Taking to her Twitter account on Thursday, Kajol shared a heartwarming montage of pictures with her mother and sister, from their childhood to the present. Along with the video, the actor tweeted, "The real Tedhi Medhi Crazy amazing woman in my life. Cheerleader to life coach and my best friend. Lucky to be your daughter. I love you, mommy. Happy Birthday."

Later, Tanishaa took to her Instagram handle and posted a Reel featuring her along with her "mommy". In the video, Tanuja throws a teal coloured pillow at the camera and the clip cuts to her daughter, wearing a dress of a similar shade. "Yup, u threw a pillow and made me. Happy birthday, mommy! U are my gift and I love u," Tanishaa captioned the post. In the background, Tanishaa added the song 'Sunja Aa Thandi Hawa' from her mother's movie 'Haathi Mere Saathi' (1971) with late co-star Rajesh Khanna.

On Tanuja's birthday last year, Tanisha had uploaded a birthday note for her mom by posting some rare pics of the actress. She shared an album for Tanuja and wrote: "Happy birthday, my earth mother. You are mischief. You are grace. You are love. You are nature. You are soul. You are my universe. Love you mommy!"

That was not all, Tanishaa even shared two throwback clicks from the 1976 Gujarati film Malavpati Munj, where Tanuja was starred opposite actor-filmmaker Upendra Trivedi. Captioning this pic Tanishaa wrote, "#happybirthdayweek #happybirthdaymommy"

Tanuja began her career as a child artist and thereafter debuted in Bollywood as the lead actor with her film 'Chhabili' (1960). Her most remarkable flick remains 'Hamari Yaad Aayegi' which was released in 1961.