Shraddha Kapoor on Thursday shared a beautiful selfie from the land of beaches, Maldives and broke the internet. Donning a swimsuit, the actress posted a picture flaunting her infectious smile.

Bollywood actress Shraddha Kapoor knows how to make waves on the internet. The gorgeous diva on Thursday shared a beautiful selfie from the land of beaches, Maldives and broke the internet. Donning a swimsuit, the actress posted a picture flaunting her infectious smile. In no time, the post went viral on the internet. She shared another picture enjoying the waves of the sea.

The actress is said to be enjoying the sun and sand in Maldives with her parents Shakti Kapoor and Shivangi Kolhapure. 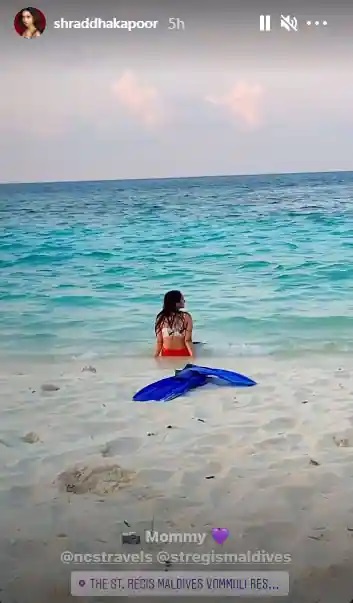 Earlier this month, Shraddha Kapoor celebrated her birthday in the Maldives and the pictures of the celebration were all over the internet. What caught everyone's attention was the love-filled pictures of her in rumoured boyfriend Rohan Shrestha's arms. There were rumours that the duo will be tying the knot soon. Rohan's father Rakesh Shrestha, in a recent interview with TOI opened up about the same and said that there will be no objection from his side once the lovebirds finally decide to tie the knot.

Rohan's father Rakesh who happens to be former ace-lensman told the portal, "As far as I was told, they were friends from their college days. Besides, they have many common friends in Juhu. They both are doing so well in their professional lives, so any decision they take about being together will also be a sensible and mature one."

Meanwhile, Shraddha Kapoor will be next seen in a trilogy 'Naagin', to be produced by Nikhil Dwivedi. She will also star in Luv Ranjan's untitled film opposite Ranbir Kapoor. The film is scheduled for a Holi 2022 release. The actress was last seen in 'Baaghi 3', co-starring Tiger Shroff. However, the film's theatrical run was cut short due to the coronavirus-induced lockdown.