Saba Ali Khan shared the heartfelt note that Kareena wrote to her before her wedding with Saif Ali Khan. Saba shared a video of the note which read,  "Dear Saba, will be great knowing you… Love and luck always… Kareena."

Saif Ali Khan's sister Saba Ali Khan has been sharing many throwback pictures from her memory book lately. From Saif and Kareena's wedding to Taimur-Inaaya's picture, she has been breaking the internet with her post. On Friday, Saba shared yet another precious memory on Instagram. She shared the heartfelt note that Kareena wrote to her before her wedding with Saif Ali Khan. Saba shared a video of the note which read,  "Dear Saba, will be great knowing you… Love and luck always… Kareena."

Kareena Kapoor Khan and Saif Ali Khan fell in love during the shoot of their 2008 film Tashan. While they tied the knot in 2012 at Taj Hotel in Mumbai, they had been in a live-in relationship for a long time before that.

Kareena had told Human of Bombay, "We'd been dating for a while, when he [Saif] said he's not 25 and can't keep dropping me home every night. So he told my mom, 'I want to spend the rest of my life with her. We want to live together.' My mom was cool with it. It's so easy with him. Even when we decided to get married, it felt right." 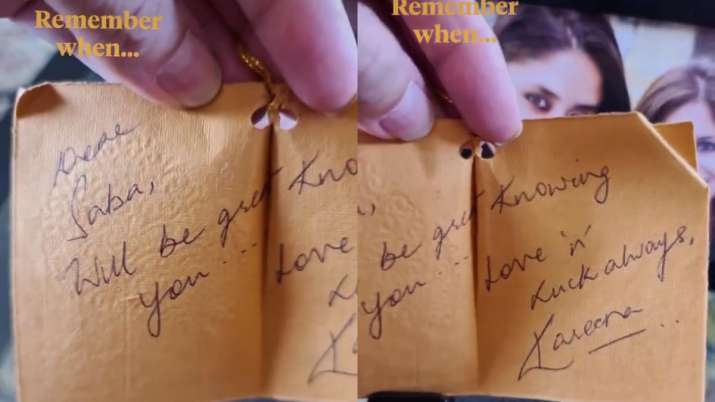 Currently, Kareena is very active on social media and sharing Covid relief helplines for those in need. Recently, Bebo shared valuable information with her fans and followers to keep them safe amid the second wave of Coronavirus. Kareena's post talks about three factors to help one make safer choices when they are in an area of widespread COVID-19 transmission. Taking to her Gram, Kareena wrote, 'Safer choices for a healthier and safer tomorrow.'

The actress will next be seen alongside Bollywood superstar Aamir Khan in the upcoming film "Laal Singh Chaddha". The Advait Chandan directorial is an official adaptation of the 1994 Hollywood hit "Forrest Gump" starring Tom Hanks, and is set to release later this year.