Mumbai Police booked Bollywood actress and model Gauahar Khan for allegedly violating Covid-19 protocols after testing positive, officials said on Monday. The Oshiwara police station lodged an FIR after a complaint lodged by the BrihanMumbai Municipal Corporation (BMC) against Gauahar. Gauahar Khan's team finally issued an official statement to refute the BMC's claim against the actress. The official statement also clarified that the actress has been tested negative in multiple reports. They also issued the latest COVID19 report of Gauahar, which shows the actress testing negative.

The official statement issued by Gauahar's team read as, "For everyone sending their best wishes and concern for Gauahar Khan, here's the latest report. She has tested negative in multiple reports. She's a law-abiding citizen and complying with all the norms of BMC. This is to appeal for all the speculation to be put to an end. Gauahar Khan is cooperating with everything that the BMC requires. Requesting all the media houses to not indulge in speculation and respect Gauahar's emotionally lowest low time as she's just lost her father 10 days ago and she's going through everything from her by the BMC. So with folded hands, we want Gauahar's time to herself, respectfully, and let her heart heal in this mourning time." 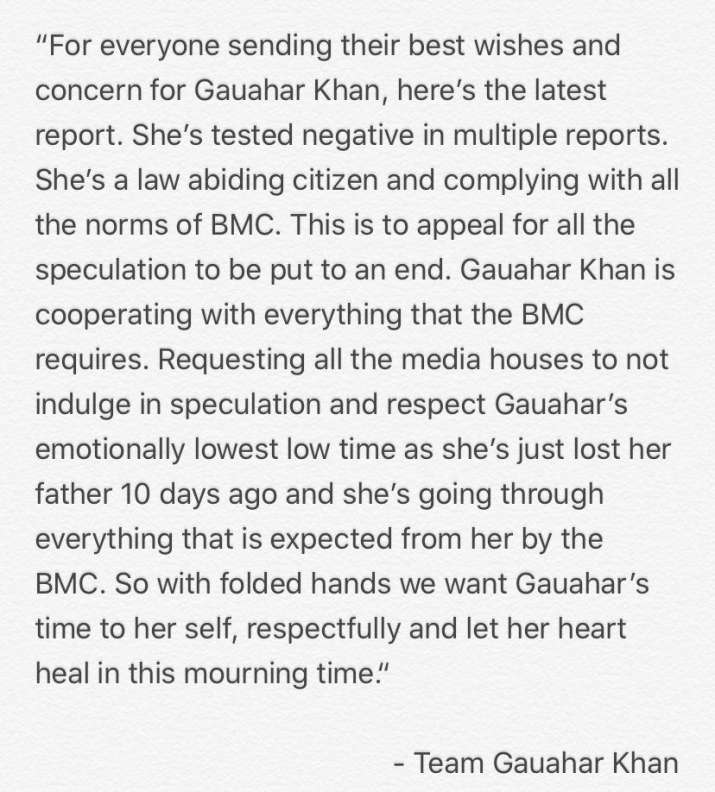 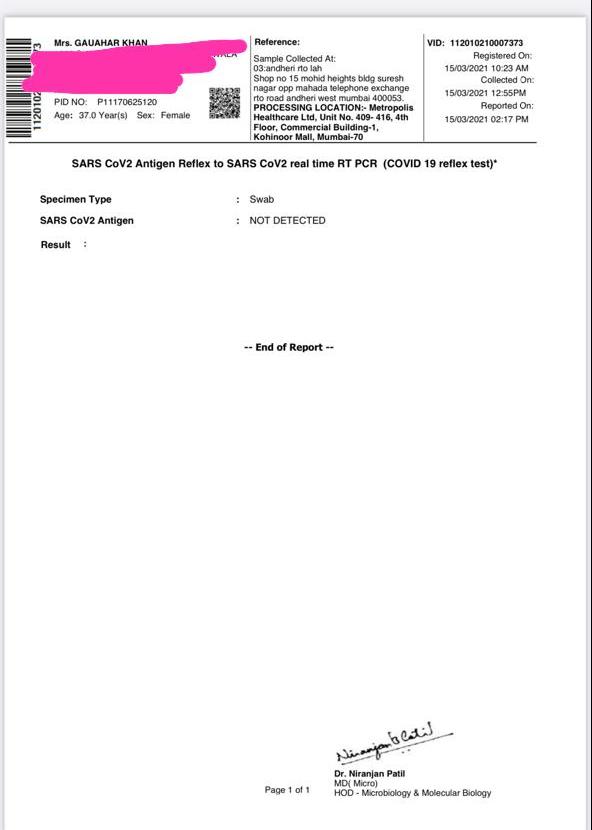 Hailing from Pune, Gauahar (37) recently got married to actor Zaid Darbar, the son of veteran music director Ismail Darbar. She had tested positive for Covid-19 on March 11.

However, despite testing positive, she attended a film shoot and was moving around in public places, unmindful that she was a carrier and could post a threat to the general public, an official said.

"The BMC has filed an FIR against a Bollywood actor for non-compliance of Covid-19 guidelines after testing positive. The rules apply to all alike and we urge the citizens to follow the guidelines and help the city beat the virus," the BMC said on Monday.

The civic body also tweeted a copy of the FIR with the actress' name blurred with a slogan -- "No Compromise On City's Safety!"