For Kriti Kharbanda 'bread pakora' is an emotion

From Amritsari fish to cakes, from kulfis to baked breads, lovebirds Kriti Kharbanda and Pulkit Samrat have been impressing their fans a lot with their culinary skills. And now the Housefull 4 actress has posted a picture of ;bread pakoras.'

For Bollywood actors Kriti Kharbanda and Pulkit Samrat, the coronavirus lockdown has been a bliss. The adorable couple who are living together during the difficult times have surely turned into chefs. Almost every day, the two try their hands at cooking and prepare dishes that surely look tempting. From Amritsari fish to cakes, from kulfis to baked breads, the lovebirds have been impressing their fans a lot with their culinary skills. And now Kriti has posted a picture of "bread pakodas".

It seems she is a huge fan of the dish as she captioned it, writing: "Because bread pakoda is an emotion." Have a look at the same here: 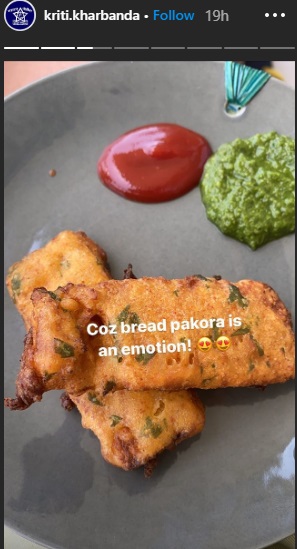 Meanwhile, have a look at some of their other culinary experience here:

Previously, the actress opened up about the time when she once felt that she's positive for COVID-19. Talking o Mumbai Mirror about the same, Kriti said, "I thought it best not to mingle given the symptoms. I was terrified I had contracted the virus but since test kits were not available in the country back then and I did not have a fever, the doctors advised me to distance myself and monitor my symptoms. I was paranoid for the first three days, then, I started to feel better."

On the work front, Kriti and Pulkit were co-stars in Anees Bazmee's comedy caper "Pagalpanti. The duo will be seen together again in Bejoy Nambiar's "Taish". The film is slated to release next year.