Farhan Akhtar added one Instagram story where he has stitched beautiful words for his girlfriend Shibani Dandekar. Find out more!

Filmmaker-cum-actor Farhan Akhtar has been dating singer Shibani Dandekar for over a year now being one of the newest couples in B -Town. Speaking of their relationship, the two met on the Zee TV show I Can Do That in the year 2015 which was hosted by Farhan and where Shibani happened to be one of the participants of the show. Both Farhan and Shibani confirmed their relationship last year by posting a photo and writing some lovely captions for each other.

These lovebirds made their first public appearance together at the Mumbai reception of actors Ranveer Singh and Deepika Padukone. Since then both of them are busy doing PDA on social media platforms. See some of their posts below:

Recently, Dil Dhadakne Do actor shared a story on Instagram. Farhan added a photo and wrote a heartwarming message for his girlfriend Shibani Dandekar. In the picture, Farhan can be seen wearing a black tee whereas, Shibani is wearing a white dress. For the post, Farhan stitched his words as,'I don't know if you find love or love finds you, either way, it's a gift from the universe. So be grateful. Every. Single. Day.' 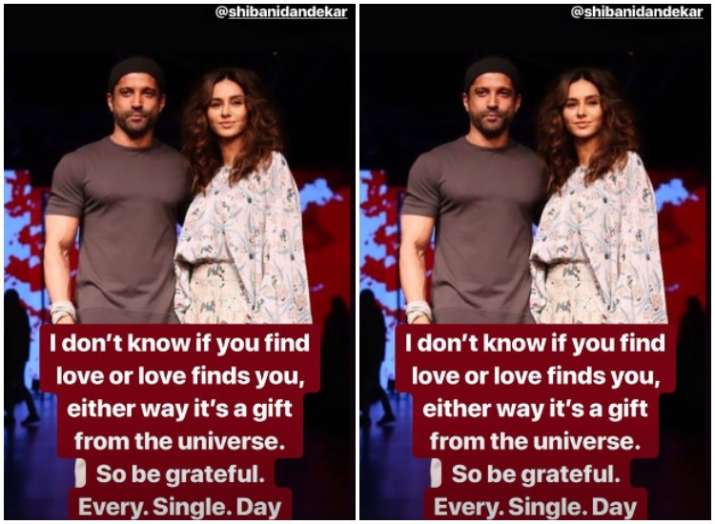 Farhan was last seen in the film Lucknow Central and his upcoming film is The Sky is Pink alongside Priyanka Chopra and Zaira Wasim. The film, based on the life of a motivational speaker Aisha Chaudhary who got diagnosed with pulmonary fibrosis, is co-produced by Priyanka Chopra, Ronnie Screwvala and Siddharth Roy Kapur.