A similar situation had prevailed even last year when the COVID-19 pandemic had put the future of many students at risk. Several colleges and universities across the country had already ended their admission process by the time the results were declared.

The Central Board of Secondary Education (CBSE) Board has already cancelled the exams for regular students of Classes 10 and 12. Since long, the private/compartment/patrachar/improvement students have also been demanding a similar pattern for assessment for them as well. Though the CBSE Board, in its official notification, has stated it would work in coordination with the UGC, students are now worried about higher admissions. According to most of the private candidates, they have already been receiving notifications from respective colleges and universities regarding their last date for application.

In its official notification, the CBSE Board had stated the exams for private category students will be conducted between August 16 and September 15. Speaking to India TV, CBSE Exam Controller Sanyam Bhardwaj on Tuesday said the announced dates are only for Class 12 private students. A separate notification regarding Class 10 private students will be released, he said.

"The released notification speaks only of Class 12 private students. We are on the discussion regarding the exam dates for Class 10 and will soon release a separate official notification for them as well," Sanyam Bhardwaj said.

Meanwhile, students belonging to the private category have also been arguing with the CBSE's statement of 'no internal data'. Candidates have taken to Twitter and are requesting the CBSE board to cancel private exams and promote them on the basis of an assessment policy. However, the exam controller today told India TV that since a number of exams were cancelled last year due to the coronavirus pandemic, the board does not have all the required records to assess the students for board exams.

"It is not possible for us to assess each and every student on the basis of past performances. We do not discriminate between students and would have cancelled the private exams if we could," Sanyam Bhardwaj said.

Hoping for some relief in the matter, some parents and students of the CBSE board even staged a protest outside the CBSE Headquarters on Thursday. They stood there with placards and posters in their hands, demanding CBSE to cancel the exams of Private/Compartment/Patrachar students. They even stated that these students are being discriminated against the regular students and must be promoted just like the rest. 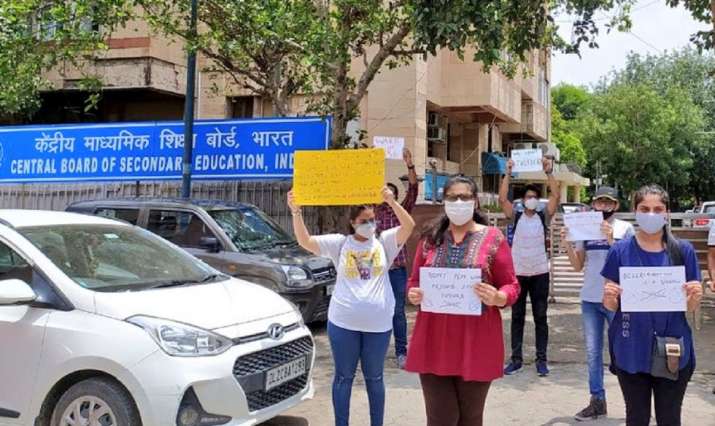 On a question of ensuring the safety of students upon appearing for offline exams, CBSE Exam Controller Sanyam Bhardwaj told India TV that complete precautions will be taken and all safety protocols will be followed.

"We will ensure highest standards of COVID safety while candidates appear for exams," Sanyam Bhardwaj said, adding, "the board and schools have made all required arrangements to ensure students do not contract with the coronavirus infection."

Wearing masks and maintaining social distancing will be a must at the exam centres, in addition to other safety protocols, he said.

A similar situation had prevailed even last year when the COVID-19 pandemic had put the future of many students at risk. Several colleges and universities across the country had already ended their admission process by the time the results were declared.

Hence, CBSE private students are now demanding intervention by Education Minister Dharmendra Pradhan and say their exams should be cancelled. However, Sanyam Bhardwaj, Controller of Examinations, CBSE, earlier told reporters that the exams would be conducted in a synchronised manner and that students would not miss out on the university admission process.

In several letters addressed to the CBSE and the Education Ministry, the parents and students have been requesting the authorities to consider the issues being faced by the candidates (including exams, assessment scheme, admission to Universities and the COVID-19 pandemic).

Hoping for some relief in the CBSE private students' matter and seeking legal intervention, a review petition has been filed in the Supreme Court. This review petition is actually a detailed representation on behalf of the parents that asks the top court to address these concerns. This has been done in response to no decision on the petition filed on June 30, addressing private students concerns and seeking cancellation of private examinations for CBSE Class 12 students.

As before, the review petition has been filed by Advocate Mamta Sharma. Even earlier when it was filed, the petition sought striking down of Clause 29 of the policy decision dated June 17 as notified by CBSE and asking for directions on the declaration of results of Private/Compartment/Patrachar students on the basis of objective methodology by July 31.