Lionel Messi beat Virgil van Dijk and Cristiano Ronaldo to win his sixth Ballon d'Or in Paris on Monday. The Barcelona superstar has now won the most Ballon d'Or trophies in football history. Ronaldo has won five Ballon d'Ors -- one with Manchester United, and four with Real Madrid.

Messi and Ronaldo had been clinching the top honour in football every year between 2008 and 2017, until Real Madrid and Croatia's Luka Modric broke their streak last year. Modric won the title after leading Croatia to their first-ever World Cup final, and playing a significant role in Real Madrid's Champions League-winning campaign.

Messi, however, reclaimed the prize, winning the award for the first time since 2015 after a stellar season with Barcelona. The Argentina star scored 36 goals in La Liga as he led the side to the league title. He scored 51 goals in total in 50 appearances for the club.

His competitor, Virgil van Dijk had won the UEFA Player of the Year award. The Liverpool defender had been central to the side's successful campaign in the Champions League. 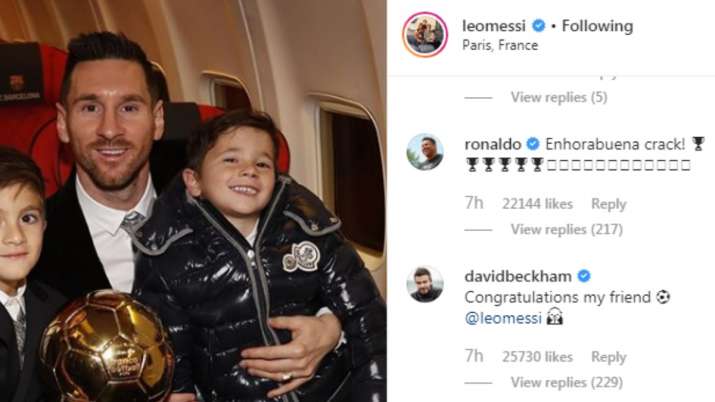