IPL this time will be a low-scoring affair with fewer boundaries and smaller team totals hence bowling is all that will matter in deciding the fate of each team.

Had the invisible and unwanted forced named 'coronavirus' not troubled mankind, the 13th edition of the Indian Premier League had been long over with international cricket teams awaiting their fate in the T20 World Cup in Australia. The plans that were laid for the December auction table in Kolkata and thereafter following the addition of new recruits, had all been in the past. But the pandemic has disrupted all fixtures. IPL 2020 was indefinitely postponed before BCCI found a way out, seeking help from the Emirates Cricket Board and eventually agreeing upon a full-fledged tournament in the UAE, thus changing all those plans, and all the match-ups that were laid down in December.

This is not the first time that IPL will be travelling to the United Arab Emirates. Back in 2014, owing to clash in dates with the general elections, the BCCI hosted the first 20 matches of the seventh edition of the tournament in the UAE, from April 16 to 30 before the beloved league returned home, to India, on May 2. Each team had played five matches in the UAE leg which does provide some perspective as to how batting would look this time around.

- There was also a significant rise in the number of boundaries that were hit from the UAE leg to those matches played in India. On average, the teams managed 4.3 sixes and 11.6 fours per innings in UAE which increased to 6.8 and 13.7 in India, respectively.

However, judging the batting conditions in a country from a small sample space could be misleading at times and hence we compiled the T20 batting numbers in UAE for the last three seasons and compared it to its corresponding IPL numbers in India. For the UAE games, we considered the numbers from the last three Pakistan Super League (PSL) matches which were played in the country along with the T20I numbers.

In 163 T20 matches (PSL and International) played in the UAE since 2017, the combined average scoring rate per over has barely even been seven. In PSL matches alone, the scoring rate was 7.23. The significant difference in the scoring rate in PSL with that of the overall numbers is largely because most international matches in the UAE involved associate nations where the level of cricket is comparatively lower.

IPL this season in UAE might also witness a significant dip in the number of boundaries per innings compared to the numbers seen in India over the last three seasons. Fours and sixes were scored at 13.56 and 6.81 per innings respectively in IPL matches since 2017. In UAE, the number falls to 10.99 and 4.41. In PSL matches over the last three seasons, the figures were 11.69 and 5.49 respectively. 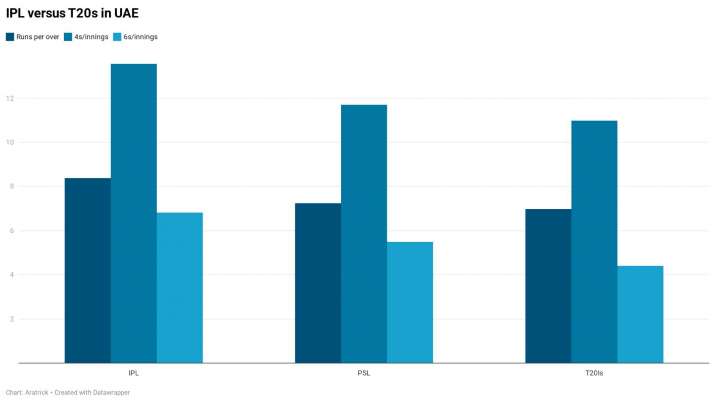 How are the T20 scoring rates at the three venues in the UAE - Dubai, Sharjah and Abu Dhabi?

The only Indian venue that has similar scoring rates over the last three IPL seasons is Chennai's Chepauk stadium where the average rate is 7.44. All other Indian venues have a scoring rate of well above 8 with Eden Gardens and Chinnaswamy recording above 9 as well.

In a nutshell, IPL this time will be a low-scoring affair with fewer boundaries and smaller team totals hence bowling is all that will matter in deciding the fate of each team.