It was March 3, 2009, Sri Lanka team took the bus for the Day 3 of the second Test match of the series, and just outside Gaddafi Stadium, Lahore, 12 armed men attacked them.

Legendary batsman Kumar Sangakkara recalled the horrific terrorist attack on Sri Lanka team bus in Pakistan during 2009 tour. It was March 3, 2009, Sri Lanka team took the bus for the Day 3 of the second Test match of the series, and just outside Gaddafi Stadium, Lahore, 12 armed men attacked them. The first match of the series resulted in a draw and nobody would have imagined that in the second Test something like that could have happened.

Eight policemen and bystanders lost their lives in the horrific incident. Six Sri Lanka cricketers got wounded and it was the bravery of the team's bus driver that saved lives of all the players. Despite a rocket being launched at the bus, the driver Mehar Mohammad Khalil kept driving and escaped them all.

We stand with our players in speaking out against racism: Cricket West Indies

Sangakkara retracted the entire incident and told Sky Sports Cricket: “At the time, when going to Pakistan, security was an issue. We had written about our concerns on security, and were exploring insurance for players if something happened. So, we were refused politely, and we were told that they have done all the groundwork to ensure security, so we went.”

“We were having our usual banters on the bus, people talking about what you are going to do this evening. One of our fast bowlers said ‘wickets are so flat here, I am going to get a stress fracture or something. I hope a bomb goes off,  so we could go home’. And 20 seconds later, this happens,” Sangakkara revealed.

The former batsman further recalled the position of the Sri Lanka players in the bus when the shooting started.

“Our team’s masseur at the time was in the front, we heard the gun shots, we thought they were firecrackers. He got up, and said ‘get down, they are shooting the bus’. Dilshan was also in front, I was more central. Mahela was right at the back, Murali was sitting right behind me so that he can annoy Thilan Samaraweera. I remember Tharanga Paranavitana, the opener, was in front.”

“All hell broke loose, we hid at the aisle of the bus, on top of each other, and then the shooting started. They shot the bus as many times they could, and threw grenades, and fired a rocket launcher. And for some reason, I don’t know why, we survived,” Sangakkara said. 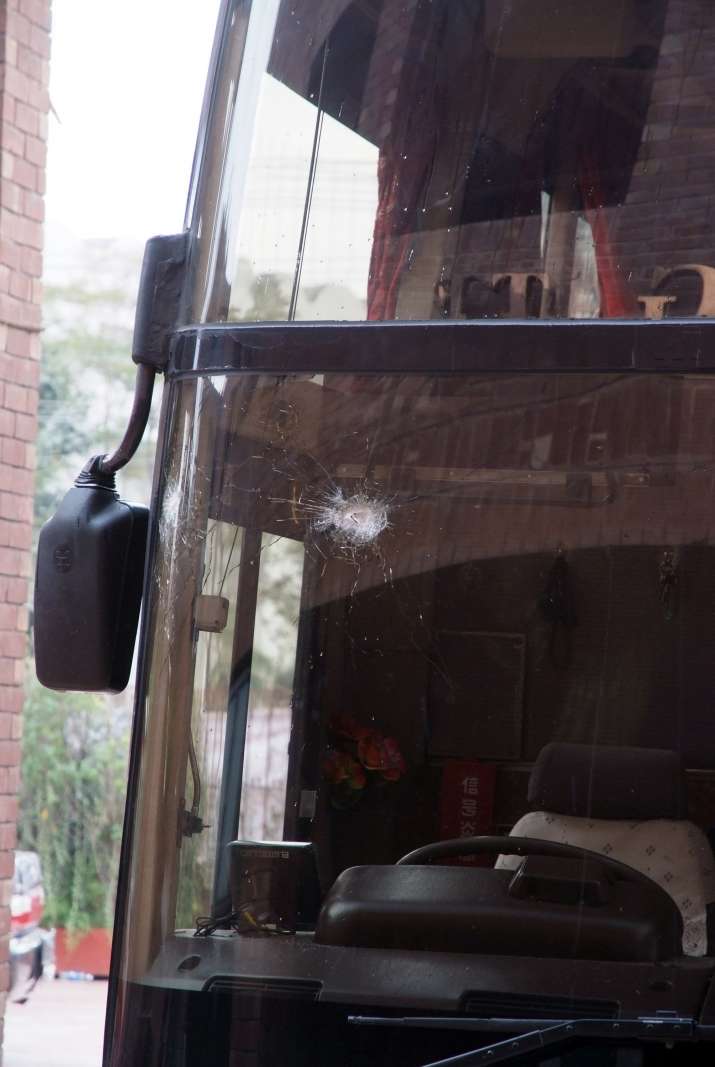 Sangakkara talked about what was going on in the bus when the incident took place. He revealed there was a panic situation when Tharanga Paranavitana started bleeding.

“Thilan was injured, I got hit on the shoulder with a lot of shrapnel. Ajantha Mendis was injured. Tharanga Paranavitana gets up bleeding from his chest and collapses saying he’s been shot. We hear ‘oohs and aahs’ from all around the bus. Paul Farbrace has an iron spike through his hand, so we get into the ground, which is 500m from there, very rudimentary security of course. Unfortunately, most of the security personnel guarding us, died and that was tragic,” he said

Sangakkara hailed the bus driver and called him the hero, who escaped them from the shooters' sight.

“They tried to shoot the bus driver, missed him by a couple of inches. He was the hero, we survived probably because he was left alive to drive us through that. Everyday he used to take four attempts to get through the narrow gate, but this time, he drove in straight into the ground. We get off. Tharanga Paranavitana, we thought had died for some reason, feels his back, and says, I don't have a hole in my back, so I think I am okay and walks off the park. Thilan is bleeding everywhere, he’s been shot very badly. He gets taken by ambulance to hospital. Ajantha Mendis and I were due to get in the next ambulance, but then they were shooting next to ambulance, so we decided we would stay here,” he further recalled.

“Being Sri Lanka Cricket team, there comes a joke from the other side, and a bit of laughter, and everyone started talking, chatting, joking. At no time, we felt sorry for ourselves. No one thought ‘why us’,” the former left-handed batsman signed off.