A run-out which broke a billion hearts: On this day, India crashed out of 2019 World Cup semifinal

The pain was visible in Dhoni's eyes when he was walking back to the pavilion and there was pin-drop silence in the crowd. The Indian dug-out was in shock as everyone knew that the World Cup trophy has now slipped away from Team India's hands.

"Irony as you said it, he is so quick between the wickets, not many would expect MS Dhoni to get run out in an important situation. But one of the fastest in the world and between the wickets leaves the big stage with a run-out," these were the words of former Indian captain Sourav Ganguly from the commentary box, when MS Dhoni was run-out in the semifinals against New Zealand in 2019 World Cup.

The run-out broke many Indian fans' hearts and the way Dhoni walked back in the pavilion with tears in his eyes made it even more painful for many cricket fans across the globe. It's been one year since then, Dhoni has not played for the Indian team.

Last year, on this day, Team India was eliminated from the 2019 World Cup in semifinals after enjoying dominating run in the group stage. It was the ultimate 'underdogs' New Zealand who beat India by 18 runs to pull off a miraculous comeback after posting 239/8 on the scoreboard.

The match started on the 9th of July, as New Zealand skipper Kane Williamson decided to bat first after winning the toss at Manchester. The Kiwis didn't start well with Martin Guptill back in the pavilion in the fourth over with just one run on the scoreboard. After his departure, skipper Williamson came in the center and built an important 68-run partnership with Henry Nicholls. The southpaw didn't prevail much as Jadeja snared him on 28. The veteran Ross Taylor then brought his experience to the game and scored 74. But Williamson's departure on 67 led to a collapse as the Indian bowlers brought their A-game on the table. After the first ball of the 16th over rain strike at the full force and the match was postponed to next day - 10th July. New Zealand scored 211/5 in 46.1 with Ross Taylor and Tom Latham on the crease.

On the next day, New Zealand batsmen came into center to score some quick runs as they managed to get 28 runs off 23 balls and lost three wickets in the process.

After New Zealand's batting, everyone was predicting it as a one-sided affair looking at India's solid batting at top.

But it was one of the rare days when India's top-3 - KL Rahul, Rohit Sharma and Virat Kohli failed in the same game. New Zealand bowlers were at their best with clouds in Manchester assisting them much-needed swing. India's topman Rohit, who scored five centuries in the tournament was the first victim of Matt Henry's wrath on just 1. Skipper Kohli walked in the center to replace him but he was trapped by Trent Boult's top in-swing delivery on 1. After him, Rahul didn't prevail the out-swinger of Henry and was also departed on the score 1. The trinity was back in the pavilion after scoring just 1 run each and in the inexperienced middle-order was exposed in front of a quality pace attack. 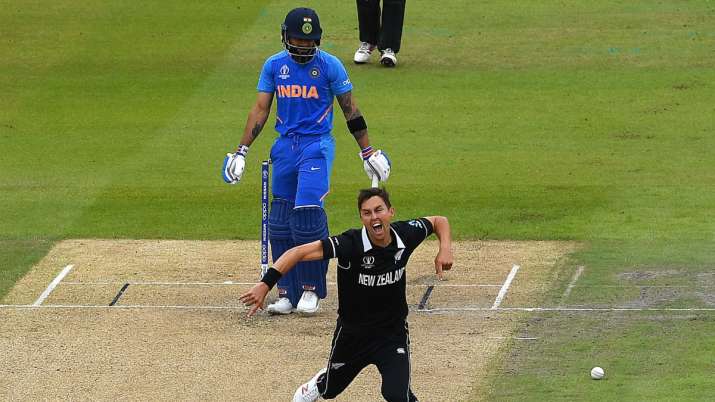 Team India played a gamble by sending young Rishabh Pant at no. 4 in the tricky situation instead of experienced MS Dhoni. Pant showed some grit and scored 32 runs off 56 balls but a rash shot cost him big time. Team management continued to save Dhoni for the last and sent Dinesh Karthik and Hardik Pandya above him, who scored 6 and 32 respectively.

After losing 6 wickets on just 92, everybody was rooting for another Dhoni special but it was Ravindra Jadeja who turned the table for India with a counter-attacking 77-run knock of 59 balls. Dhoni played a second-fiddle in the 116-run partnership with Jadeja. Boult removed Jadeja and the pressure was back on MSD's shoulder. The equation was tough after Jadeja's departure as India needed 32 off 12 but Dhoni was famous for overcoming that kind of hurdles. But this time it wasn't his day, on the third ball of the next over, Lockie Ferguson bowled him a short delivery and Dhoni tried to pull him but didn't connect it as it landed in open space. The quick MSD tried to steal a double but a rocket throw from Guptill, who was having a miserable tournament redeemed himself by dismissing the former India captain.

The pain was visible in Dhoni's eyes when he was walking back in the pavilion and there was pin-drop silence in the crowd. The Indian dug-out was in shock as everyone knew that the World Cup trophy has now slipped away from Team India's hands.

The tail didn't last long as India were all-out for 211 in 49.3 overs and New Zealand were through to final.

Eventually, New Zealand lost to England in the final due to the controversial boundary count-back rule after the super over between the two teams was ended in a tie.

Dhoni took a sabbatical from the game after the heartbreak 18-run loss and was expected to make his comeback in the national team with IPL 2020 but unfortunately, it's also postponed indefinitely due to coronavirus pandemic.