Rahane to the rescue: 'Jinx' grows in stature with prolific show against SA

Ajinkya Rahane put out remarkable performances, and has once again proved to be a player to bank upon when the going gets tough.

In the first day of the first Test against West Indies in August, Kemar Roach wreaked havoc in the opening session of the play. He found the edges off Mayank Agarwal and Cheteshwar Pujara, while Shannon Gabriel fed off Virat Kohli’s urge to play aggressive. Rahane had joined KL Rahul on the field at 25/3. It was anything but an ideal position for the Mumbai batsman to come in. Moreover, Rahul has had his own issues with the inconsistent form. Being a more experienced campaigner, it was down to Rahane to rediscover his mojo.

Two months later, Rahane found himself in a similar position in the home Test series against South Africa. A similar batting order collapse followed Rahane at the crease at 39/3 in the Ranchi Test – and again, as a more experienced campaigner.

On both the times, Rahane showed his worth and steered India away from trouble.

India’s recently-concluded series against South Africa saw the emergence of a ‘new world order’ of sorts. The side’s pace-attack was a revelation in itself – more so because of the absence of its number one bowler, Jasprit Bumrah. The batsmen were scoring runs for fun – three of them converting their hundreds into double tons. It is only justifiable that Indian pacers made the headlines, for such domination from them was hardly seen before on home soil. The double-hundreds were special, too – it was for the first time when an Indian batsman passed the 200-run mark in each of the three matches in a Test series.

Amongst such heavyweight performances, many contributions often go unnoticed. An innings of 59 off 168 deliveries, for example. Virat Kohli’s 254 swept away the eyeballs. In the latter, Rohit Sharma’s success in his maiden Test as opener grabbed all the headlines; on both occasions, justifiable so.

But bring in the context, and one does realize the value of those knocks.

Rahane joined Virat Kohli in the middle after the side had lost Cheteshwar Pujara and Mayank Agarwal in relatively quick successions. The Indian captain had barely settled yet and Keshav Maharaj and Senuran Muthusamy – the spin duo for South Africa, were beginning to create a bit of issues.

The Mumbai batsman, however, despite his noted shortcomings against spin, put on a gritty shift to deny South Africa a chance of a comeback. He eventually saw off the difficult period alongside Virat, who also choose to play on the defensive. Both the batsmen added 71 runs till the end of the day, playing 145 deliveries. Rahane faced 69 of those, scoring 14 runs. In the bigger picture, however, he weathered the storm alongside Virat and provided India with a much-needed opening. 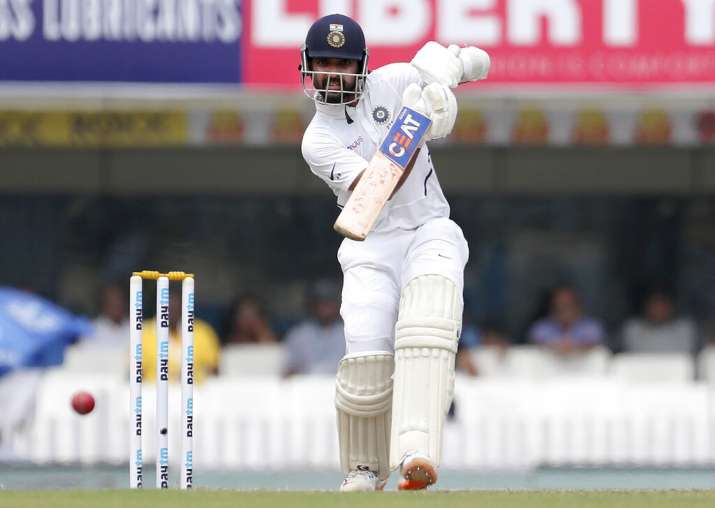 At 39/3, Rahane arrived at the crease much earlier than he would have anticipated in the final Test. This was his chance, though. It was an opportunity for him to score big – he had time to build. And the Mumbai batsman finally made his mark and ensured that his innings makes a lasting impact. He joined Rohit Sharma after the side had lost Agarwal, Pujara and Kohli. Rohit, a fellow Mumbaikar, had just braved Kagiso Rabada’s fierce spell with incredible grit and patience.

When Rahane entered the crease, a charged-up Anrich Nortje was at one end, bowling in utter delight of having dismissed Virat Kohli as his first Test wicket. On the other end was Lungi Ngidi, who had warmed the bench for the first two Tests. The pitch was providing movement, but none of the two were able to extract as much of it as Rabada. The Mumbai batsman was beaten, but he also punished the bad balls.

By the time Kagiso Rabada arrived, Rahane had his eyes and feet set. First ball – on off and middle stump, and Rahane waits; a delicate flick; the bat almost vertical and bottom hand in full force; the ball glides towards the midwicket boundary for four.

By the time Rabada’s second spell ended, Rahane had scored 43 off 48 deliveries. Rohit, too, bide his time and reached his half-century by then, scoring 52 off 89 deliveries. The Indian number-5 had absorbed the pressure and counter-attacked, showcasing inexplicably brilliant timing – especially against the pacers.

Rahane went on to score a century – 115 runs. South Africa were in the game, and then, Rahane and Rohit joined forces to push them out so far it became beyond their reach to ever recover.

Ajinkya Rahane faced troubles with his form for the past few months, and only scored his first Test century in two years in August 2019 against West Indies. He worked on his game with a stint in Hampshire, and hasn’t looked back since. With consistent performances which were exhibited his supreme abilities to steer the sinking ship, Rahane grew in stature and proved, once again, to be the most trusted of all Indian batsmen.