As per the guidelines for allocation of power, 15 per cent power from CGS is kept as “unallocated power” which is allocated by the central government to needy states.

The Power Ministry on Tuesday asked states to utilise unallocated power of the central generating stations (CGS) to meet the requirements of their own consumers amid the ongoing coal shortage crisis in the country.

"It has been brought to the notice of the Ministry of Power that some states are not supplying power to their consumers and imposing load shedding. At the same time, they are also selling power in the power exchange at a high price," a power ministry statement said.

As per the guidelines for allocation of power, 15 per cent of power from CGS is kept as “unallocated power” which is allocated by the central government to needy states to meet the requirement of power of the consumers.

The responsibility to supply power to the consumers is of the distribution companies and they should first serve their consumers who have the right to receive 24x7 power.

Thus, the distribution companies should not sell the power in the power exchange and starve their own consumers, it stated. 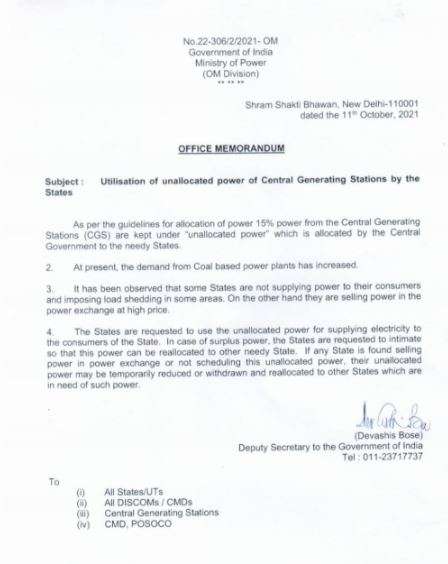 In case any state is found that they are not serving their consumers and selling power in the power exchanges at a higher rate, the unallocated power of such states shall be withdrawn and allocated to other needy states, it added.