​Several states in north India received rain on Wednesday as the Monsoon fully covered Uttarakhand, Jammu and Kashmir, and Ladakh, even as the flood situation in Assam remained grim with one more death taking the toll to 12.

Several states in north India received rain on Wednesday as the Monsoon fully covered Uttarakhand, Jammu and Kashmir, and Ladakh, even as the flood situation in Assam remained grim with one more death taking the toll to 12.

The national capital too recorded light rains on Wednesday, as the monsoon reached the doorstep of the city.

"Monsoon clouds are at the doorstep of Delhi. A few places witnessed rains. As predicted, the onset of the monsoon in the city will be declared on Thursday," IMD Director General Mrutunjay Mohapatra said.

The Safdarjung Observatory, which provides representative figures for the city, recorded 14.6 mm rainfall and a maximum temperature of 34.6 degrees Celsius, three notches below normal.

However, the humidity levels shot up to 100 percent due to the rains, causing inconvenience to the residents.

Kuldeep Srivastava, the head of the regional forecasting centre of the India Meteorological Department, said monsoon clouds led to rains in parts of Delhi on Wednesday. However, the onset will be declared on Thursday only.

The flood situation in Assam, meanwhile, remained grim on Wednesday, with the deluge killing one more person and affecting 38,000 people in five districts of the state.

The fresh death was reported in Sivasagar district, taking the death toll in this year's floods in the state to 12, as per the daily flood report issued by the Assam State Disaster Management Authority (ASDMA). 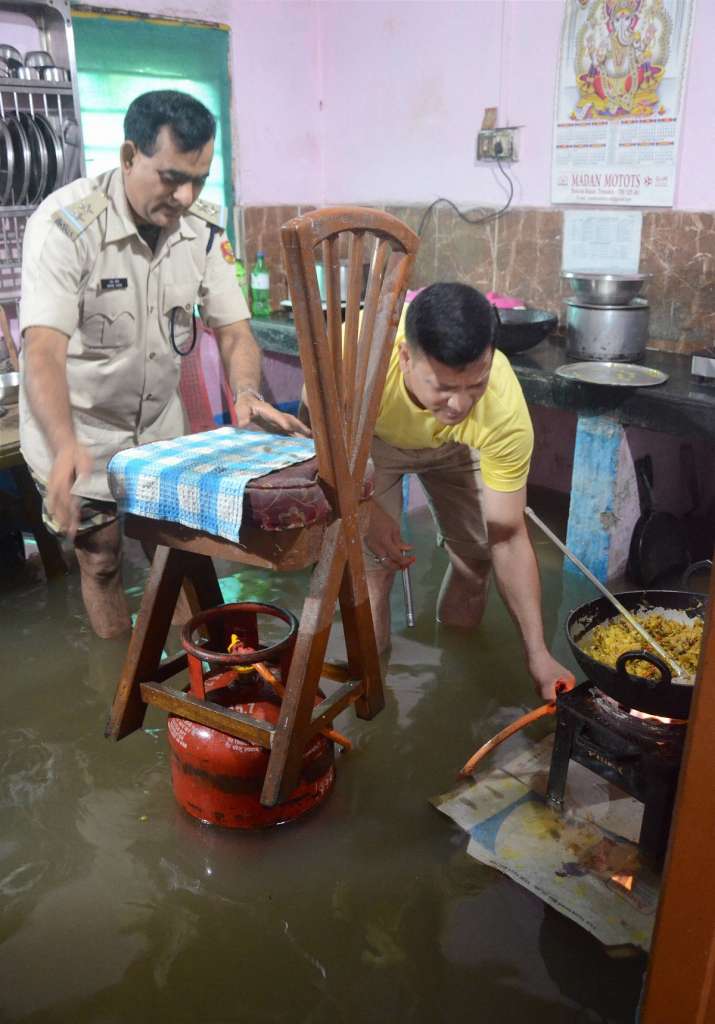 Around 38,000 people have been affected due to the floods in Dhemaji, Jorhat, Majuli, Sivasagar and Dibrugarh districts, it said.

Dhemaji has been the worst-hit with 15,000 affected people, followed by Dibrugarh with 11,000 and Sivasagar with 10,000 people suffering due to the deluge.

The monsoon also advanced into northern parts of Punjab, bringing rains and causing temperatures to drop, a Meteorological Department official said in Chandigarh.

Normally, monsoon arrives in Punjab and Haryana in the first week of July.

"The monsoon has advanced into northern parts of Punjab, and Chandigarh. Conditions are favourable for its further advancement into most parts of Punjab and Haryana on Thursday," a Meteorological Department official said in Chandigarh.

The monsoon has advanced into the entire Uttarakhand, Jammu & Kashmir, Ladakh, Gilgit-Baltistan and Muzaffarabad, the IMD said.

In Punjab, Patiala and Amritsar recorded maximum temperatures of 34.7 degrees Celsius and 35.2 degrees Celsius, respectively, both three notches below normal.

Heavy rains also lashed Chandigarh, the joint capital of Punjab and Haryana, in the afternoon. The maximum temperature in the city settled at 33.3 degrees Celsius, four notches below normal.

In Haryana, Narnaul recorded a high of 31.4 degrees Celsius, 10 notches below normal, after the rains.

In Ambala, the mercury settled at 33.5 degrees Celsius, four notches below normal, after light rains.

During the next two days, light to moderate rain or thundershowers are likely in many parts of Punjab and Haryana, including Chandigarh, according to the weather department.

It has forecast heavy showers at isolated parts in north Haryana and Punjab during this period.

“Conditions have become favourable for further advance of southwest monsoon into some more parts of Rajasthan, remaining parts of Uttar Pradesh, Delhi, most parts of Haryana and Punjab during next 24 hours,” the IMD said in its update at 5 pm Wednesday.

Most parts of Himachal Pradesh received rainfall on Wednesday as the southwest monsoon made its foray into the state, about a week early compared to the last year, the meteorological department in the state said.

The maximum temperatures in the state dropped by 2-3 notches as several parts of the state received light to moderate rainfall on Wednesday, it said. The highest temperature in the state was recorded at Bilaspur at 34.5.

The monsoon hit Rajasthan, covering 14 districts, a day prior to its usual date of arrival.

"Conditions are favourable this time and therefore, the monsoon has covered over 14 districts of Rajasthan on the first day of its arrival today. Monsoon is likely to be good this time,” an official of the meteorological department in the state said.

This is the third time in a decade when monsoon has hit the state before its normal time.

Monsoon normally enters Rajasthan on June 25, as per the MeT.

Rains lashed several parts of the state, with Kota recording 13.6 mm of rainfall, followed by 6.1 mm at Jodhpur, 2.8 mm in Dabok and 0.7 mm in Jaipur. Light rainfall was recorded in Ajmer.

The monsoon has been normal in Uttar Pradesh so far, the Meteorological (MeT) Department said on Wednesday.

Light to moderate rain/thundershowers occurred at many places in eastern Uttar Pradesh, and at a few places in the western part of the state, according to the MeT Department.

Heavy rain occurred at isolated places in the state.