Watch: Crocodile rescued from drain amid heavy rains in Gujarat

As Gujarat has been receiving heavy rains due to cyclone Maha, a 6.5 feet long crocodile was rescued from a drain in Vadodara. A video of the crocodile being taken away by the forest officials has gone viral. This is not the first incident wherein a crocodile has ventured onto the streets of Gujarat during heavy rains.

A 6.5 feet long crocodile was rescued from drainage in Gujarat on Tuesday. According to news agency ANI, the reptile was later handed over to the forest department. In a video that has now gone viral, forest officials can be seen taking away the crocodile after it was rescued from a drain in Vadodara. The crocodile is tied up and is being dragged to the rescue van.

Gujarat has been receiving incessant rains since the past few days, which may be the reason behind the crocodile surfacing in the drain.

In the past too, there have been instances wherein deadly crocodiles have been seen on the streets amid heavy waterlogging in Gujarat. 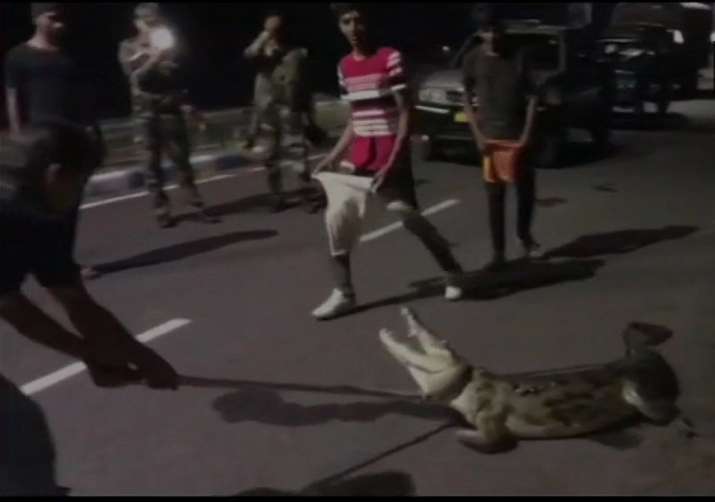 Heavy damage expected in Gujarat due to Cyclone Maha this week.

Moderate to heavy snowfall and rains have been predicted in union territories of Jammu and Kashmir and Ladakh for three days starting from tomorrow, IMD predicted.

Also Read | Crocodile takes shelter inside police station in UP