The severity of Cyclone Vayu remains a threat for Gujarat's coastal areas even though it has changed course and is unlikely to make landfall in the state on Thursday. Earlier, the cyclone was moving straight towards the Gujarat coast, but is has now slightly moved away. The IMD will issue further updates about the cyclone by afternoon. Stay tuned to this space as we bring to you live and latest updates on Cyclone Vayu.

Cyclone Vayu did not make landfall on the Gujarat coast on Thursday as it was expected and passed by the Saurashtra region later in the day.

It is likely to move north-northwest and then north-westwards "skirting the Saurashtra coast".

Skymet Weather stated that the ‘Very Severe Cyclone' may weaken into a Category 1 Cyclonic Storm from Category 2, though the wind speed will be 135 km per hour to 145 km per hour gusting up to 175 km per hour.

Gujarat has, meanwhile, already evacuated nearly three lakh people and the Diu Union Territory, that touches the Saurashtra coast, have moved over 10,000 people to safety.

HERE ARE THE LIVE AND LATEST UPDATES ON CYCLONE VAYU:

Gujarat Chief Minister Vijay Rupani: According to IMD bulletin #CycloneVayu which was going to hit Gujarat has moved towards Oman. But still for 24 hrs administration will be on high alert, schools of 10 districts will stay closed tomorrow. pic.twitter.com/9qVyKVDcLW

07:45 pm: Defence Minister Rajnath Singh reviews preparations of  Indian Navy, Coast Guard. He was briefed about the ability & readiness of various assets of Headquarters Western Naval Command (HQWNC) that have been made ready to be deployed to the affected areas in case of requirement.

06:15 pm: Highest wind recorded till now is 114kmph at Dhamrej in Sutrapada Taluka.

04:35 pm: Around 35 small boats parked at Porbandar coast washed away in the sea due to the wind and high tides.

03:40 pm: Heavy spells of rainfall continues over coastal areas and is likely to continue during the next 3 hours, says IMD.

03:39 pm: Western Railway: Nine more trains canceled and another four short terminated with partial cancellation as a precautionary measure in view of the Cyclone Vayu.

03:30 pm: NDRF rescued a pregnant woman requiring pre-term delivery from Shiyalbet village, where boats are the only mode of transportation & brought her to a hospital in Jafarabad. The woman successfully delivered a baby boy, condition of both the child and mother are stable.

Ministry of Earth Science said that Cyclone Vayu is over Northwest and East central Arabian Sea.

12:38 pm | Worst may have been averted, but authorities leaving nothing to chance

Even after it has become clear that Cyclone Vayu will not make landfall, authorities have warned that the cyclone system will still have an adverse effect on the weather in coastal districts of Gujarat.

Airports in these regions have already been asked by the government to closely monitor the situation. It has been reported that Diu, Bhavnagar and Porbandar airports have been experiencing strong winds gusting upto 60 kmph. The officials have been told to take note of meteorological data.

Daily prayers and rituals are being carried out in Somnath temple in Veraval, Gujarat. The threat of Cyclone Vayu has not dampened the spirit of devotees.

10:42 am | Cyclone Vayu has re-curved eastwards, say US Navy projections

Projections made by the US Navy suggest that Cyclone Vayu has re-curved eastwards. More details are awaited to accurately know whether this has changed situation vis-a-vis the cyclone making a landfall.

10:03 am | Authorities, security forces on alert without any laxity

Authorities, agencies and security forces are on alert even when it is clear that Cyclone Vayu will not make landfall.

9:31 am | Coastal districts to be affected due to Cyclone Vayu

Although Gujarat has been largely spared from the full fury of Cyclone Vayu, the 'very severe cycloninc storm' will likely have an effect on coastal districts. Storm surge will be observed and conditions at sea will be turbulent.

9:05 am | Here are details about the latest comment from IMD

Manorama Mohanty, a scientist from IMD Ahmedabad said that Cyclone Vayu will not hit Gujarat.

Manorama Mohanty, scientist at India Meteorological Department (IMD), Ahmedabad: #CycloneVayu won't hit Gujarat. It will pass nearby from Veraval, Porbandar, Dwarka. Its effect will be seen on the coastal regions as there will be heavy wind speed and heavy rain as well pic.twitter.com/tt57jsbjWt

8:05 AM | Beaches in Konkan closed for public

In view of Cyclone Vayu, beaches in Konkan in Maharashtra have been closed for public

Maharashtra: In view of #CycloneVayu in Arabian Sea coupled with high tide on June 12 & 13, all beaches in Kokan region have been shut off to the public. #Visuals from Bandra beach in Mumbai pic.twitter.com/fRvT2SbZGC

7:15 am | IMD strongly warns against venturing into the sea for fishing

India Meteorological Department in its latest weather bulletin has advised 'total suspension' of fishing operations on the coast of Gujarat. Sea conditions are increasingly getting turbulent as Cyclone Vayu is approaching the coast.

6:52 am: Here is how the Indian Navy is preparing for Cyclone Vayu

Indian armed forces have always been there to help citizens in times of need. As Cyclone Vayu inches towards the coast of Gujarat, the Indian Navy has deployed its ships in the Arabian Sea to help in the rescue effort. Click on the video below to know more.

6:47 am: Trains from Mumbai to Ahmedabad late by more than 5 hours

The approach of Cyclone Vayu has affected train services. Trains running between Mumbai and Ahmedabad are now late by more than five hours.

6:30 am: Waves batter Porbandar in Gujarat as Cyclone Vayu inches closer to the coast

Large scale preventive measures are being taken in Gujarat to minimise the impact of Cyclone Vayu as it hits the coast. The cylone is expected to make landfall in the afternoon today.

As Cyclone Vayu approaches the coast, conditions over the sea have become rough.

#WATCH Gujarat: Visuals from Chowpatty beach in Porbandar as the sea turns violent. #CycloneVayu is very likely to cross Gujarat coast between Porbandar and Mahuva as a very severe cyclonic storm, today. pic.twitter.com/NnCornrMqe

04:36 am | Cyclone Vayu is expected to make landfall sometime in the afternoon, says Indian Meteorological Department 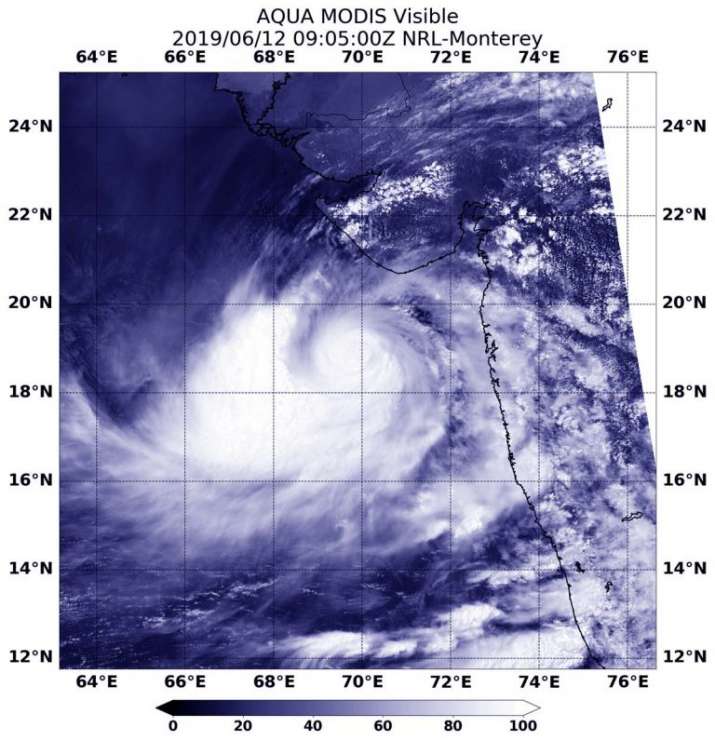 The Airports Authority of India has said that flight operations will remain suspended at five airports in Gujarat for 24 hours from  midnight Wednesday in order to minimise the damage to airport infrastructure and to avoid inconvenience to passengers due to Cyclone  Vayu. Flight operations will remain suspended in Porbandar, Diu, Bhavnagar, Keshod and Kandla airports, the Airports Authority of  India (AAI) said. Directors of AAI's Bhuj and Jamnagar airports have been asked to write to the Indian Air Force to suspend  operations of civil flights from these two airports also.

12:45 | Cyclone Vayu Update: Control room helplines for the 10 districts likely to get affected

12:28 | Cyclone Vayu Update: Details on evacuation from areas expected to get affected

A total of 2,02,014 people have been evacuated till 6 pm from 10 districts of Gujarat. #CycloneVayu is very likely to cross Gujarat coast between Porbandar and Mahuva as a very severe cyclonic storm tomorrow morning. pic.twitter.com/jDEwSldn2A

12:23 | Cyclone Vayu Update:  Rail schedule has been disrupted because of 'Vayu'

Ahead of Cyclone Vayu in Gujarat, the Western Railway has decided to fully cancel operation of 15 mainline trains, while 16 other mainline trains will be short terminated with partial cancellation as a precautionary measure.

NDRF has pre-positioned 52 teams, comprising around 45 rescuers each, for rescue and relief operations. The teams are equipped with  boats, tree-cutters, telecom equipment. The Indian Coast Guard, Navy, Army and the Air Force units have also been put on standby  while aircraft and helicopters are carrying out aerial surveillance. 10 columns of the Indian Army have been Army have been kept on  standy. Warships and aircraft of the Indian Navy have been kept on standby as well.

State-owned Oil and Natural Gas Corp (ONGC) has put its installations in the western offshore on high alert and restricted helicopter  sorties. Two emergency control rooms have been set up in Mumbai and Hazira in Gujarat to keep a close watch on the situation as it  develops. Helicopters and a multi-support vessel (MSV) have been kept on standby for any rescue and relief operation that may be  warranted post Cyclone Vayu hits landfall.