The viral video shows Terence Lewis allegedly touching Nora Fatehi inappropriately during an episode of 'India's Best Dancer.' Ever since social media is filled with trolls and questions slamming the choreographer and asking Nora as to why she hasn't spoken about the same. And now it seems that Nora has finally given an answer to everyone!

Dancer and actress Nora Fatehi and choreographer Terence Lewis came in the limelight recently for all the wrong reasons. It all happened when a video of the two from their reality show India's Best Dancer went viral. The video shows Terence allegedly touching Nora on her bums. Ever since social media is filled with trolls and questions slamming the choreographer and asking Nora as to why she hasn't spoken about the same. And now it seems that Nora has finally given an answer to everyone! Commenting on Terence's latest Instagram post in which he can be seen carrying Nora in his arms, she wrote about 'video morphing and photoshop.' Not only this, she even applauded Terence for not letting the negativity affect him and remaining poised and dignified.

The picture shared by Terence was from their show in which Nora has temporarily replaced actress Malaika Arora. The two of them can be seen in traditional Indian attires. The caption on the post read, "A Zen Master and his disciples of monks were walking in the Himalayas back to their monastery. On their way to the monastery they had to cross the river Ganga flowing fully though less violently. There was an young beautiful maiden in distress, sitting close to the banks, whose village was just across the river. She was scared to cross the river by herself so she asked the elder monk to help her cross the river."

Further, he wrote, ""Sure" said the Zen Master and held her up in his arms. They crossed the river and he let her down gently as she went to her village after thanking the Master. The younger monk wasn't taking this all easily. He looked little worried. The monks came to their monastery after couple of hours of difficult walk in the hills, but the younger monk was still not settled. Sensing it the Guru asked him what the matter was. The young monk said "Master, we have sworn of not touching a woman, but you carried her in your arms, you tell us not to think of women but you touched her" complained the disciple. The Zen Master smiled n replied "I carried her across the river and left her on the other side. Are You Still Carrying Her ? "

Replying to this interesting story, Nora wrote, "Thank you Terrence! In todays time of social media video morphing and photoshop effects for meme purposes.. im glad you have not let it bother you and you have remained poised and dignified! This too shall pass you and geeta maam have been so respectful with me and have made me feel so loved and accepted as a judge on the show, its been a great life learning experience! Stay blessed." 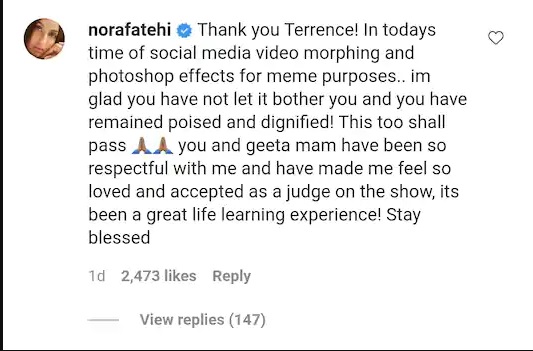 For the unversed, Nora was last seen in Street Dancer 3D and has even featured in a lot of popular songs like Dilbar, Saki Saki, etc.

What do you have to say about the same incident?