it's a happy day for Bharti Singh and husband Haarsh Limbachiyaa today since they are celebrating their third wedding anniversary on Thursday. This calls for a celebration and some social media PDA. Both of them took to their respective Instagram handles and shared pictures and love-filled post for each other.

Popular comedian Bharti Singh has been trending on the social ever since her arrest in the drugs probe took place. Soon after she and her husband Haarsh Limbachiyaa were granted bail, people started trolling them on social media. Well, it's a happy day for the two of them today since they are celebrating their third wedding anniversary on Thursday. This calls for a celebration and some social media PDA. Both of them took to their respective Instagram handles and shared pictures and love-filled post for each other.

Bharti's post also included some unseen pictures from their wedding ceremony. Her emotional note read, "Love is not about... how many days, months, or years you have been together. Love is about how much you love each other every single day. happy anniversary my love #lovelife #powercouple #strongertogether #BFF #soulmate #3anniversary @haarshlimbachiyaa30. thankyou sooo much."

Haarsh also shared few clips and wrote, "A good marriage isn’t something you find , it’s something you make and you have to keep making it. “Happy anniversary my love @bharti.laughterqueen."

While many of their supporters poured in congratulatory comments, Bharti's dear friend and comedian Kapil Sharma shared their picture and wished them on their special day.  Kapil shared an image on his Insta story and captioned it as, "Happy marriage anniversary @bharti.laughterqueen n @harshlimbachiyaa003. love you both." 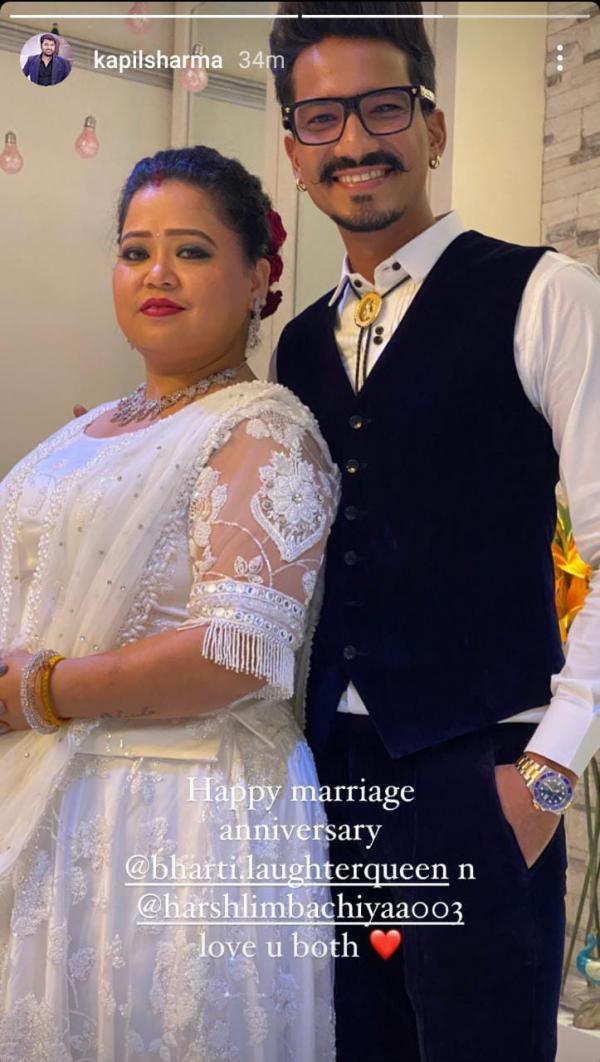 The two of them recently made public appearance post their arrest for the very first time. They attended Aditya Narayan and Shweta Agarwal's reception. A video clip from the celebration is going viral on the internet in which they can be seen having a gala time and clicking pictures with their fans.

Speaking about the controversy revolving around them, it all happened when thei name popped up during a drug peddler's interrogation. Soon, theur residence and office was raided by the Narcotics Control Bureau (NCB) and 86.5 gm of ganja (cannabis) were recovered. They were booked under the NDPS Act Sections 20(b)(ii)(A) (involves small quantity of drugs), 8(c) (possession of drugs) and 27 (consumption of drugs).