Bollywood producer Karim Morani's daughter and actress Zoa Morani has been discharged from Mumbai's Nanavati hospital on Sunday after she tested negative for coronavirus. On Saturday, sister Shaza Morani also tested negative for COVID-19 and was discharged from the hospital as well. Zoa tested positive on April 7 and was moved to the COVID-19 positive patient's isolation ICU in Mumbai hospital. Two days later, her father, producer Karim Morani, tested positive for the virus. The actress had returned from a trip to Rajasthan, and self-quarantined herself post the trip.

On Sunday, Zoa took to her Instagram stories to share a picture of herself from the last day in the hospital and confirmed to her fans that she has recovered. She wrote, "Time to say goodbye to my warriors from space and keep them in my prayers forever! Good Bye Isolation ICU. Time for #homesweethome." Actor Varun Dhawan also shared the same story on his Instagram. Check out- 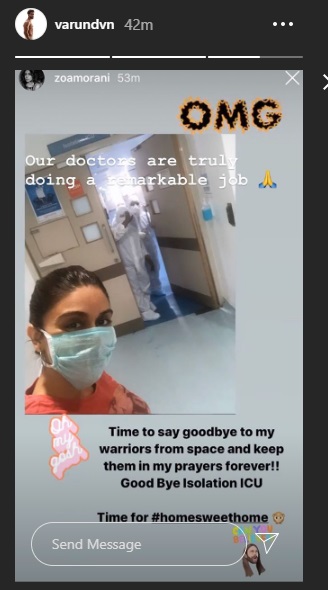 In an Instagram live on Saturday evening with actor Varun Dhawan, Zoa said she is feeling much better thanks to the medication and health care she received at Kokilaben Dhirubhai Ambani hospital, where she is currently admitted.

For the uninitiated, Zoa Morani made her Bollywood debut with Shah Rukh Khan's production venture 'Always Kabhi Kabhi'. Also featuring Ali Fazal in on of lead roles, the film released in 2011 and bombed at the box-office. She later featured in films like 'Mastaan' and 'Bhaag Johnny'. In 2018, she made her digital debut with Zee5's 'Akoori' and was last seen in 'Bhoot Purva' in 2019 which streamed on the same OTT platform.

Before making her acting debut, she also worked as an Assistant Director for 'Om Shaanti Om' and 'Halla Bol'.