Reacting to the viral video shared by singer Sonu Nigam, Bhushan Kumar's wife Divya Khosla Kumar took to Instagram and called him 'thankless' as Tseries had launched him in the industry. On the other hand, singers like Monali Thakur and Adnan Sami have backed up Sonu Nigam's claims.

After actor Sushant Singh Rajput's sudden demise, Bollywood is in shock. His death has raised controversy over nepotism in the film industry with people coming out with their stories. After Kangana Ranaut bashing Bollywood biggies for not welcoming 'outsiders' with open heart, singer Sonu Nigam shared about the politics in the music industry that can ruin anyone's career. He shared a video on Monday morning captioned as, "Laaton ke mafia baaton se nahi maante. (you cannot reason with the uncouth mafia with words)."

He also urged the music companies to be generous towards the news artists otherwise more people will commit suicide. He added, "Marina Cover yaad hai na? Woh kyon boli, woh kyon back out kiya yeh mujhe nahi pata. Media ko pata hai mafia kis tarah function karta hai. Uska video mere paas padha hai. Ab agar tune mere se panga liya, toh woh video main apni YouTube channel mein dal dunga. Samjha? Mere mooh mat lagna (Do you remember Marina Cover? I don't know no why they spoke and why they backed out, but media knows how the mafia functions. I still have that video with me. Now if you mess with me, I will upload that video on my YouTube channel. So don't mess with me)."

Reacting to the video, Bhushan Kumar's wife Divya Khosla Kumar took to Instagram and called him 'thankless' as Tseries had launched Sonu Nigam. He wrote, "Today it’s all about who can run a good campaign.. Im even seeing people being able to sell lies and deceits with their strong campaigns.. #SonuNigam such kind of people know how to play with the minds of the audience.. God save our world!!" 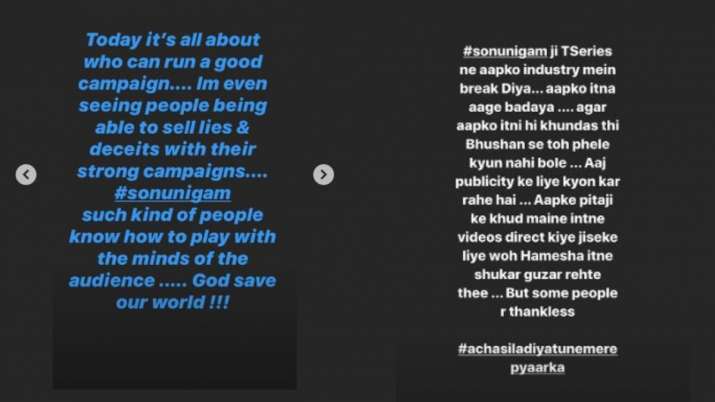 Singer Monali Thakur backed up Sonu Nigam's claims and revealed that power lies in the hands of few in the music industry. She claims that mafia does exist and nobody gets their due. She told Bollywood sky that she sent him a message thanking him for saying the truth.

She said, "I was thankful to him because he is a senior and he has been in the industry for so long. He is a very big name and an iconic musician. He is over all these things... But it is so true that there is a lot of ‘mafiagiri’ in the music industry. Nobody gets their due. That is the reason why I do not like the atmosphere and ecosystem of the music industry. I don’t even try to get movie songs anymore. I alienated myself because I care for my mental health."

Adnan Sami has also suported Sonu Nigam and questioned, "Have you, the movie and music mafia who have arrogantly entitled yourselves as the self-professed and self-appointed gods not learned anything from history that you can never control art and the ecosystem of creativity of any field."

Celebrities are voicing out their opinions after Sushant Singh Rajput was found dead at his Bandra apartment on June 14, 2020. The actor was said to be in depression for the last six months because of Bollywood rivalry.

Goodbye, Sushant Singh Rajput: A look at his best memories