While fans were mesmerised by Suhana's pictures that were shared by mother Gauri Khan, it was Shah Rukh Khan's comment that took away the limelight.

Bollywood superstar Shah Rukh Khan's daughter Suhana Khan has not even stepped into Bollywood yet and her pictures blow away the internet every time. The star kid keeps treating fans with her glamorous avatars, however this time it was mother Gauri Khan who shared Suhana's scintillating pictures. She wrote, "Yes !!!! Blue is my favourite colour." In the pictures, Suhana looks gorgeous in a white tank top with a pool in the backdrop.

While fans were mesmerised by Suhana's pictures, it was Shah Rukh Khan's comment that took away the limelight. The superstar said, "Whatever colour you take the picture in, and Suhana is in it….is our favourite colour." Not just SRK, many other celebs complimented Suhana. Maheep Kapoor wrote, "stunning Suhana." Pakistani actress Mahira Khan also commented, "How gorgeous is Suhana! MashAllah." 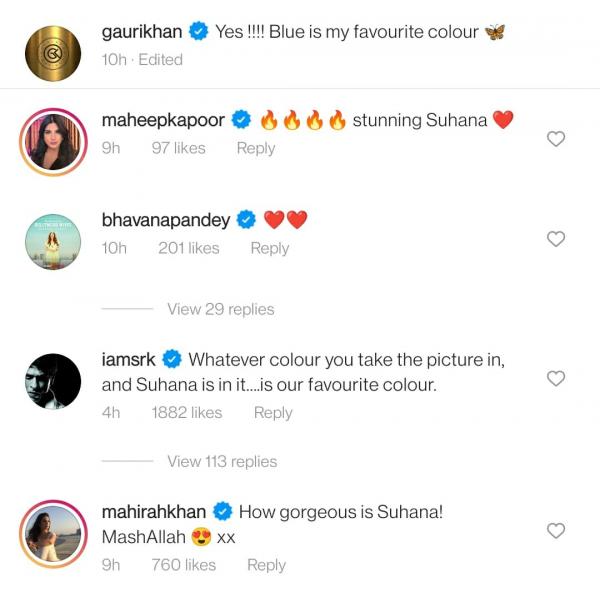 On the other hand, while Suhana is yet to make her Bollywood debut, she has already featured in short film called The Grey Part Of Blue. Sharing the film on YouTube, the director had written, “Incredibly happy to finally release The Grey Part of Blue. I am blessed to have worked alongside the most amazing and talented set of people, throughout what has been the most incredible journey. What a year, and what an experience."

"I want to say thank you to all of you for the continued support, and now for watching and sharing your feelings on the short film. All of it, thank you, it means the world.”

Suhana Khan is in New York where she is completing her studies. She is studying filmmaking.