Posting a shirtless selfie from a picturesque location, Ayushmann Khurrana flaunts his toned abs and chiselled physique. Without any surprises, fans are loving the photo. Check out the viral pic here!

Ayushmann Khurrana is relishing the long Dussehra weekend with his family. The actor who is currently on a vacation wished his fans 'good morning' with a charming photo of himself. Posting a shirtless selfie from a picturesque location, Ayushmann flaunts his toned abs and chiselled physique. Without any surprises, fans are loving the photo. In less than 30 mins the photo has garnered over a lakh likes on Instagram with thousands of comments. His admirers are loving this Dusshera gift from the actor.

"Now it is a happy Dussehra," exclaimed a fan commenting on the photo, while another said, "Please, you look so hot." "The temperature is for sure rising," commented a third user. Several others dropped heart and fire emoji on Ayushmann's shirtless photo. His co-star Bhumi Pednekar was also impressed with the post. Reacting to it, she wrote, 'Oh ho!." Take a look:

It was only recently that videos and pictures of Ayushmann Khurrana along with his wife and director Tahira Kashyap, and their children Virajveer and Varushka from the airport went viral on social media. Reportedly, the family is off for a relaxing family-time vacation. Taking to her Instagram Story, Tahira shared a video of the family at the airport, all set for their fun-filled time together. In the video, Ayushmann can be seen sporting a black-on-black comfortable outfit, while Tahira opted for a breezy summer dress.

Tahira also posted a picture on her Instagram Story in which her face is covered with a big white hat with her name written on it. The picture revealed that the family is on a vacation somewhere by the beaches. To pique the interest of her followers, she wrote, "Guess where I am!" 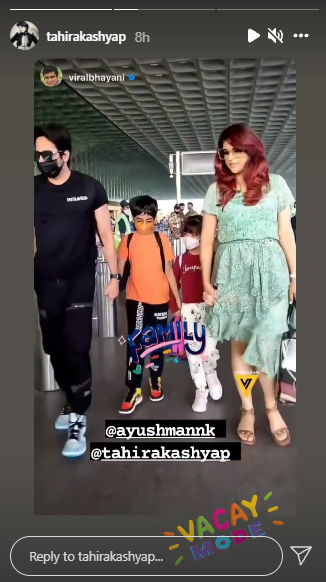 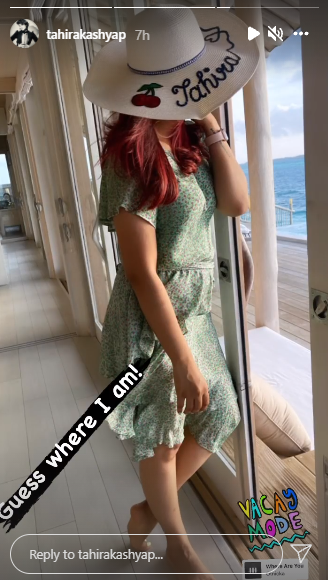 Meanwhile, on the work front, Tahira has her directorial debut feature film 'Sharmaji Ki Beti' in her kitty. Ayushmann's projects in the pipeline include 'Doctor G', 'Chandigarh Kare Aashiqui' and 'Anek'.