What made Malaika Arora say 'Awesome' to rumoured boyfriend Arjun Kapoor? Deets inside

After the much-awaited teaser of Arjun Kapoor's forthcoming thriller film, India's Most Wanted is OUT, many Bollywood celebrities are pouring with comments on Arjun's latest 'gram post. Know more!

Currently, Arjun Kapoor is making headlines for his love relationship with actress Malaika Arora. Malaika, who happens to be the ex-wife of actor Arbaaz Khan, hasn't confirmed her relationship status but is very often spotted with the 33-year-old actor Arjun Kapoor. Going by the latest Instagram pictures of both the actors, the two spent a vacation together in the Maldives as well.

Now, after the much-awaited teaser of Arjun Kapoor's forthcoming thriller film, India's Most Wanted is OUT, many Bollywood celebrities are pouring with comments on Arjun's latest 'gram post. Among the many B-town celebs, Arjun's rumoured girlfriend Malaika also left a comment on the post. The 45-year-old actress defined the teaser as "Awesome" and left the Clapping emoticon with her comment. See here: 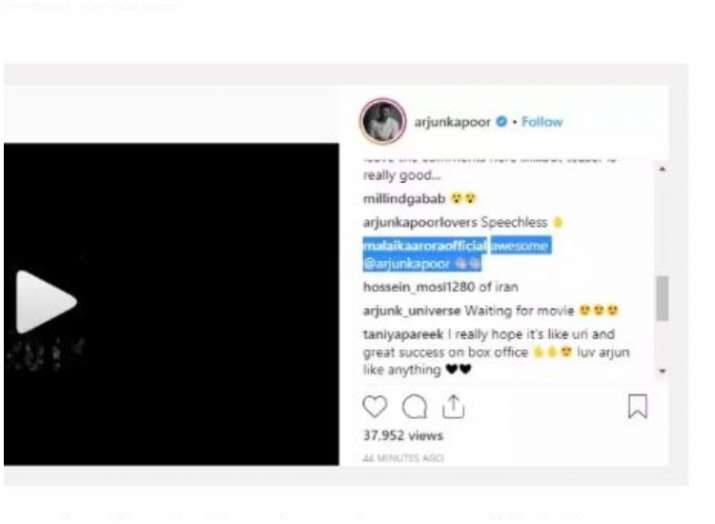 Since the past two days, Arjun Kapoor is quite active on all the social media platforms sharing the posters and teaser videos with his fans. Check here:

The unbelievable story of the manhunt for India’s Osama. An operation that had no guns, only guts. Watch the #IndiasMostWantedTeaser now! Link in bio. @rajkumargupta08 @foxstarhindi @raapchik_films @saregama_official #IMW

Inspired by true events, #IndiasMostWanted is a story of guts & pride. It's about the 5 men who save the lives of a billion people by hunting down India's Osama. Teaser out at noon today. @rajkumargupta08 @foxstarhindi @raapchik_films @saregama_official #IMW

He was faceless. He was nameless. He was called India’s Osama. Presenting #IndiasMostWanted, a story inspired by true events. Teaser out tomorrow. @rajkumargupta08 @foxstarhindi #RaapchikFilms @saregama_official #IMW

I am proud to present to all of you #IndiasMostWanted, an unbelievable story inspired by true events. Teaser out tomorrow. @rajkumargupta08 @foxstarhindi #RaapchikFilms #IMW

With this film, the actor will be seen in an all-new character which is a piece of great news for Arjun Kapoor's fan club. Helmed by filmmaker Raj Kumar Gupta, it also stars Amrita Puri in the lead role. The movie will be released in theatres all over India on May 24, 2019.

For our readers, let us tell you that Arjun made his Bollywood debut with the film titled as Ishaqzaade alongside Parineeti Chopra in the year 2012. Since then, the 33-year-old actor has been escalating his fan base with films including 2 States, Gunday, Ki & Ka, Half Girlfriend, and Namastey England to name a few.