Ileana D'Cruz gave befitting reply to an Instagram user when he questioned about her virginity.

Bollywood actress Ileana D'Cruz is quite active on social media and never misses out an opportunity to interact with her fan following. Recently, she had a chat with her fans on Instagram via 'Ask Me Anything' session. Ileana replied to maximum of her fans and answered about her likes, dislikes and upcoming movies, however, one question irked her for obvious reasons.

When one of the Instagram users asked, ''Man... When did you lose your virginity...?,'' Ileana made sure to give the person a befitting reply. Shutting down the troll like a boss, she wrote, ''Wow. Nosy, much? What would your mother say? Tsk tsk." 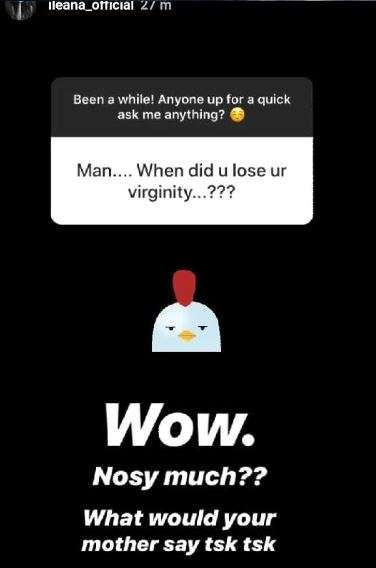 Ileana is one of the actresses who is often trolled for her Instagram pictures. Last year, she sent a straight forward message to her trolls through an Instagram post. Sharing a semi nude photo, she wrote a quote by RM Drake: "F*ck their opinions and what they think you are. You are NOT made of their flaws. You are made of your own darkness and exploding stars."

“fuck their opinions and what they think you are. you are NOT made of their flaws. you are made of your own darkness and exploding stars.” - @rmdrk . . . 📷 @rohanshrestha

Ileana will next be seen in Anees Bazmee's comedy Pagalpanti, which also stars Anil Kapoor, John Abraham, Arshad Warsi, Pulkit Samrat and Kirti Kharbanda in important roles. The film will hit the theatres on November 8.