Nick Jonas and Priyanka Chopra are giving couple goals with their every single public appearance together.

Global icon Priyanka Chopra is all set to woo the audience with her upcoming Hollywood film Isn’t It Romantic, which is set to release on Netflix in India on February 28. Also starring Liam Hemsworth, Rebel Wilson and Adam DeVine in pivotal roles, the film’s special screening was held recently where Priyanka Chopra’s husband Nick Jonas made a dapper appearance. While the couple looked adorable together, it was Nick Jonas who stole limelight at Priyanka Chopra's Isn't It Romantic special screening and how!

Taking to her Instagram account, Priyanka Chopra shared a picture of herself and Nick Jonas from Isn't It Romantic special screening. “Find someone who looks at you like that”, the Quantico actress captioned the adorable picture. To which, Nick Jonas replied, 'Looking like a snack.' 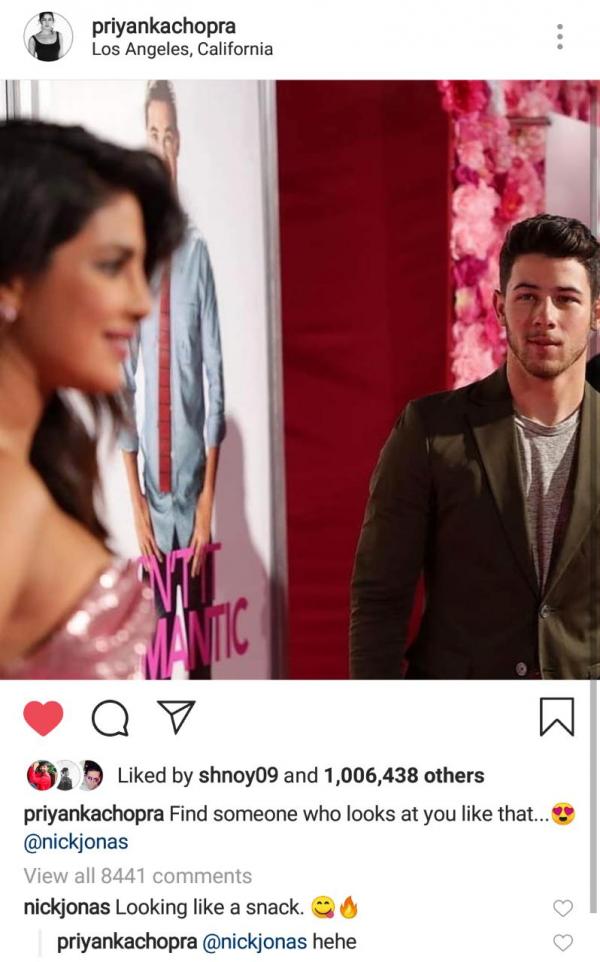 As Priyanka Chopra got down from her car at the entrance of the theatre, the actress tripped on her heels, but Nick Jonas was quick to hold her. Shared by one of the Priyanka Chopra fan pages, the video has gone viral as Nickyanka fans can’t stop adoring the power couple. Have a look at the viral video.

Aww they’re so cute 😍 he carried her over a puddle. #priyankachopra #nickjonas #mrandmrsjonas #nickyanka #couplesgoals

Directed by Todd Strauss-Schulson and written by Erin Cardillo, Dana Fox and Katie Silberman, Isn’t It Romantic stars Liam Hemsworth, Rebel Wilson, Adam DeVine and Priyanka Chopra in key roles. The film follows the story of a woman who gets hit on the head and after waking up, realises that she's landed in a place where everything plays out like a romantic comedy.