Fatima Sana Shaikh is in no mood to have slut-shaming people on her followers' list anymore.

Bollywood actress Fatima Sana Shaikh has been a cynosure of online trolls ever since she debuted in Bollywood. The actress has been criticised by low lives for her way of dressing and some go to extent of giving her sermons on Islam. Recently, when Fatima shared a picture of herself along with a poignant quote that reads, "Aaj kal me dhal gaya, din hua tamam..Tu bhi soja so gayi rang bhari sham" Though we didn't find anything wrong with her picture, many of her Instagram followers had problems with her dressing since its Ramzan time. Fed of such moral policing and comments, Fatima wrote, "To all the people giving me love. Really appreciate it. Thank you so much. Love you guys." 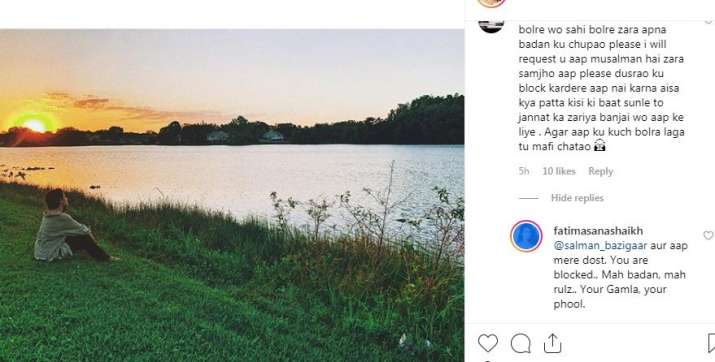 Despite this comment, one person started to remind her that she's Muslim girl and by no means she should wear such dresses during Ramzan. Giving it right back at the troll, Fatima Sana Shaikh wrote, "Aur aap mere dost, you are blocked... Mah badan, mah rulz.. your gamla, your phool." 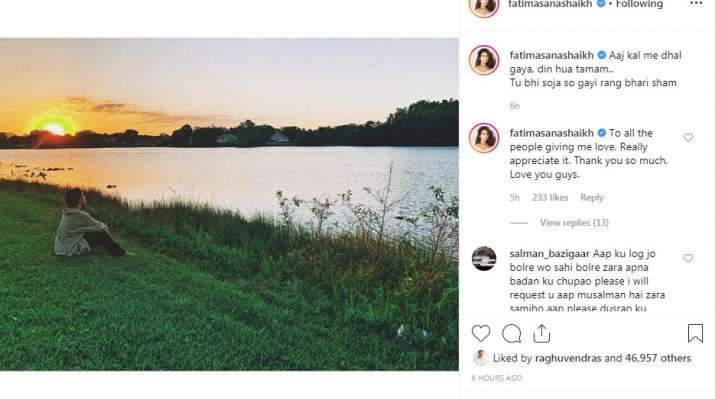 On the work front, Fatima Sana Shaikh will share screen space with Sacred Games star Saif Ali Khan in horror-comedy Bhoot Police. She will also be seen in Life In A Metro sequel which is titled Ludo. Fatima made her debut in Bollywood with Aamir Khans' super-hit film Dangal. She played the role of real-life Olympic gold medalist Geeta Phogat who is a talented wrestler from India. Sanya Malhotra, who is her best friend, played her younger sister Babita Phogat in the film.