Kolkata: Popular as 'Kolkata Shah Rukh', superstar Shah Rukh Khan's doppelganger and self-confessed fan Shahnawaz Khan claims there is something about him in SRK's forthcoming film "Fan"."I can't say now but I am sure there

"I can't say now but I am sure there is something about my life in the film," Shahnawaz told a television channel here.

Busy with his SRK mimicry acts, Shahnawaz who keenly follows the "Dilwale" actor's style, says he has impressed both him and his wife Gauri with his impersonations.

"He has jokingly said, 'aaisa mat kar warna log mujhe nahi pasand karengey. Tu meri carbon copy hai (don't copy me or else people will not like me. You are my carbon copy)'". 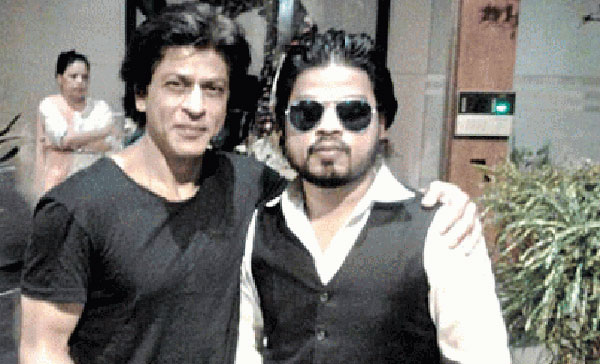 "He knows me very well. I visit his Mumbai residence Mannat every year on his birthday," said Shahnawaz, who gave up his studies to pursue his dream of being SRK.

"The film's dialogue 'Gharwale bhi na mere... samjhte nahi hain... Wo sirf star nahi hai... Dunia hai meri (My family doesn't understand. He is not just a star, but he means the world to me)...' reflects my situation. My parents don't understand why I am so interested in him," added the performer, who is in his early thirties.

"Fan", which also stars Waluscha De Sousa, Illeana D'Cruz and Shriya Pilgaonkar among others, is slated to release this year.