Prime Minister Narendra Modi's route was changed at the last minute as he couldn't take the chopper to Ferozpur due to poor weather.

Prime Minister Narendra Modi's security witnessed a major lapse on Wednesday while he was on his way to Ferozpur from Bathinda in Punjab to address a poll rally and lay the foundation stone of Delhi-Amritsar-Katra expressway among other developmental projects.

The security breach took place when the Prime Minister was travelling to Ferozpur via road when some protesters blocked the highway due to which his cavalcade was stuck on the flyover for 15-20 minutes.

Prime Minister Narendra Modi's route was changed at the last minute as he couldn't take the chopper to Ferozpur due to poor weather. The Home Ministry said after the "major security lapse" in the prime minister's travel in Punjab, his convoy decided to return and postponed the Ferozpur event. 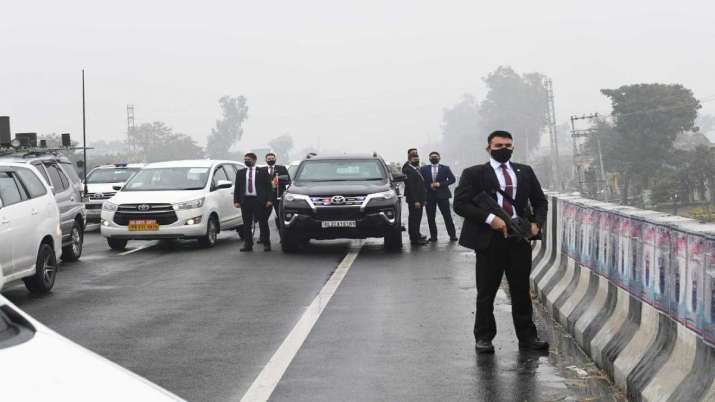 "This deliberate security breach is nothing but an attempt to assassinate the Prime Minister and the Congress government in Punjab is responsible for it. Just because the Congress can’t defeat PM Modi politically, they are resorting to unconstitutional means to eliminate him…" wrote BJP's IT cell chief Amit Malviya as he shared a video showing the moment when the PM was stuck on a flyover.

The Home Ministry has sought a detailed report from the Punjab government on the matter.

VIEW | In 5 photos, see how PM Modi was stuck after major security lapse in Punjab