Gujarat Municipal Election Result 2021 LIVE: The Bharatiya Janata Party (BJP) appeared on course to dominate civic bodies in Gujarat as winning 2,085 seats, while the Congress won 602 seats so far across various municipalities, district and taluka panchayats in the state where results for 2,771 seats out of the total 8,474 have been declared.

Counting of votes for polls to 81 municipalities, 31 district panchayat and 231 talukas is currently underway amid tight security. The polling took place on Sunday with municipalities recording a voter turnout of 58.82 per cent, while the figure was 65.80 for the district panchayats and 66.60 per cent for taluka panchayats. Re-polling was held during the day in a booth in Ghodiya in Jhalod taluka of Dahod district after two EVMs were damaged during Sunday's polling by three people. The booth recorded around 50 per cent turnout during the re-poll. 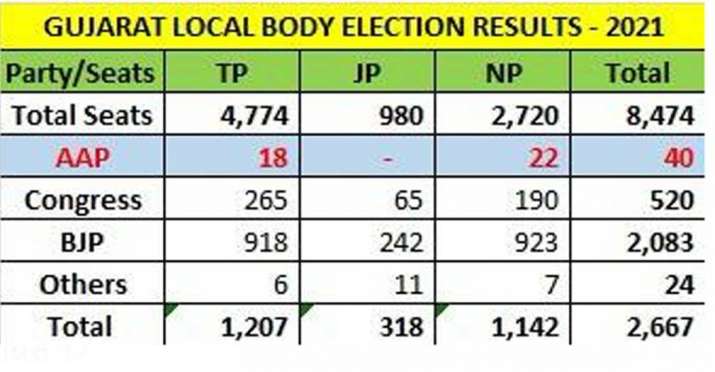 # PM Modi said in his tweet that the results of Gujarat civic polls have confirmed the faith people have in BJP. "Results of the Nagar Palika, Taluka Panchayat and District Panchayat polls across Gujarat give a crystal clear message- Gujarat is firmly with the BJP’s agenda of development and good governance. I bow to the people of Gujarat for the unwavering faith and affection towards BJP," PM Modi tweeted in Gujarati.

#Union Home Minister Amit Shah has thanked the people of Gujarat for reposing their faith in BJP. "This victory is dedicated to development and welfare of the poor, farmers and villagers. The BJP-led government has won the trust of people again," Amit Shah tweeted in Gujarati.

Bagasara Taluka Panchayat: BJP wins 2, Congress and AAP get 1 each

Gujarat Municipal Election Result Live Updates: Counting of the votes in the elections to Gujarat’s 81 municipalities, 31 district panchayats and 231 taluka is underway amid tight security.

Gujarat Municipal Election Result 2021 LIVE: Police on Monday said 17 people were arrested in Vadodara for allegedly taking custody of EVMs after polling late Sunday evening in Tarsva in Waghodia taluka. The mob had claimed the EVMs were tampered and police had to fire a round in the air and lob four teargas shells to bring the situation under control, said a Waghodia police station official.