The counselling for the NEET-MDS admissions will take place from August 20 till October 10, Centre informed Supreme Court on Tuesday.

The counselling for the NEET-MDS admissions will take place from August 20 till October 10, Centre informed Supreme Court on Tuesday. The response came on a plea filed by advocate Tanvi Dubey, a day after the apex court directed the Centre to apprise it by August 11 when it will conduct counselling for the NEET-MDS admissions for which exams were held on December 16, 2020.

The affidavit comprising the counselling schedule was submitted before the court on Tuesday. 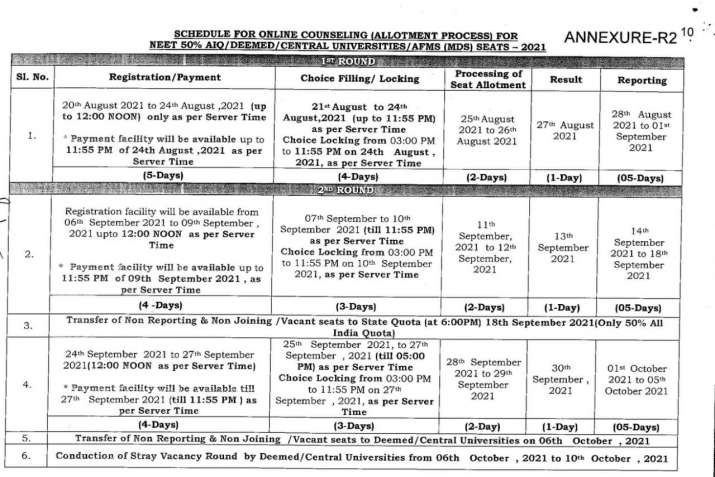 Advocate Dubey said she was satisified that the counselling schedule has been released finally.

Earlier on Monday, Additional Solicitor General K M Nataraj, appearing for the Centre, had said that it will need two weeks to work out the modalities and issue a notification in this regard. However, the top court asked it to inform by Wednesday.

“What is this. We have read last week that the Centre has approved the OBC quota. Now again you will take it to October or November. We will not allow this. You please tell us by Wednesday when you are going to conduct the counselling. We are listing the matter as the first item. You apprise us,” the bench had said.

READ MORE: NEET aspirants to get multiple attempts in a year? NTA responds

On July 29, the Centre has approved announced a 27-per cent quota for OBCs and 10 per cent reservation for the Economically Weaker Section (EWS) category in the All-India Quota (AIQ) scheme for undergraduate and postgraduate medical and dental courses from the current academic year, 2021-22.

On July 12, the top court had taken strong note of delay in holding the counselling; saying the Centre and others have been “dilly-dallying” for a year now. It had said that these are qualified BDS students and why has Centre not held the counselling since last year.

Besides the Centre and MCC, the bench had earlier also issued the notices to the Dental Council of India and the National Board of Examination (NBE).

The plea said that these doctors are challenging the “unjust and infinite delay” caused by the MCC in announcing the counselling schedule for NEET-MDS, 2021. The plea also sought a direction to the MCC to conduct a separate counselling for the NEET-MDS 2021. The results for admissions in PG courses for BDS candidates were also declared on the scheduled date, that is on December 31, 2020.

READ MORE: Tell us by Wednesday when will you conduct counselling for NEET-MDS admissions: SC to Centre