Ajinkya Rahane-led India will take on New Zealand in the first Test at the Green Park in Kanpur. Follow Live Match Updates 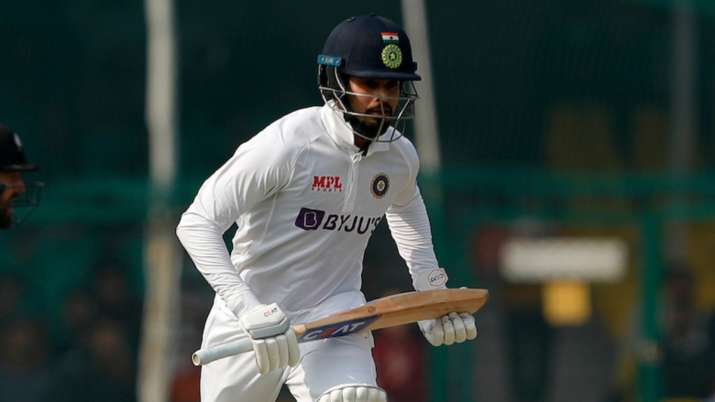 India batsman Shreyas Iyer, who made his Test debut, hit his maiden Test half-century to rescue India from a precarious position on the first day of the first Test match against New Zealand here at the Green Park, Kanpur on Thursday. In the debut match, Iyer was asked to bat at the number five position. He completed his fifty in 94 balls with the help of six fours. Iyer, 26, made his ODI and T20I debut in 2017 however he had to wait a bit longer for his opportunity in the longest format of the game.

Rahane, Pujara fail as Jamieson's twin strike restricts India to 154 for 4 at tea 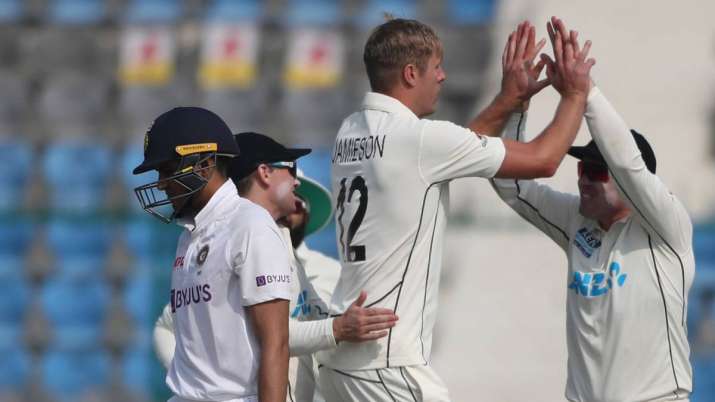 Kyle Jamieson pitched the ball in right areas to strike thrice as New Zealand pegged India back, restricting them to 154 for four at tea on the first day of the opening Test after skipper Ajinkya Rahane and his deputy Cheteshwar Pujara failed to convert their starts.

Jamieson (3/38), who picked up Mayank Agarwal in the opening session, removed a well-set Shubman Gill (52 off 93 balls) and Rahane (35 off 63 balls) in the afternoon, using the variable bounce to good effect. 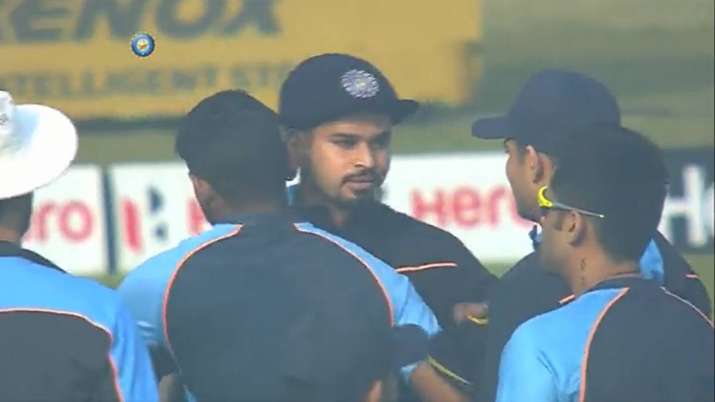 Iyer became the 302nd player to make his Test debut for the national team and before the toss against New Zealand here, it was India's greatest opener and former skipper Gavaskar, who was invited by Dravid to present the cap to a fellow Mumbaikar.

IND vs NZ 82/1 at Lunch Comeback man Shubman Gill settled down nicely after initial nervous moments to remain unbeaten on 52 as India reached 82 for one at lunch against New Zealand on the opening day of the first Test here.

Gill, who missed out on the England Test series due to a shin injury, played some delightful shots all round the wicket to reach his fourth Test half-century but more importantly has put the New Zealand spinners on back-foot.

9:32 AM Both openers Shubman Gill and Mayank Agarwal have walked out in the middle. Tim Southee will start with the new ball.

9:19 AM A dream come true moment for Shreyas Iyer, who receives his maiden Test cap from legendary Sunil Gavaskar.

9:10 AM: Pitch Report The pitch is giving every hint of being the rank turner like it has always been in the past. There is no grass on the pitch and some cracks are already opening up. Batting first is a wise choice as the wicket will be easier to bat on early but those cracks will only get wider and play up later on. Given the nature of the cracks, which are quite prominent, pacers will get some reverse swing as well.

9:02 AM India have opted to bat first after winning the toss. Shubman Gill and Mayank Agarwal are all set to open while Shreyas Iyer has been handed his Test debut by stand-in captain Ajinkya Rahane.

If there is anyone who can challenge Team India then it's Kane Williamson, says Irfan Pathan

"If we talk about the two-test series, if there is anyone who can challenge Team India then it is Kane Williamson, the man himself because he's a fantastic cricketer. Especially when it comes to Test cricket," said Pathan on the 'Follow the Blues' show on Star Sports.

"But, the second biggest challenge for the Indian team will be playing at Wankhede, in Mumbai because that pitch will be very much suited to New Zealand cricketers as well because it has bounce. Unless we get a rank turner if the pitch is really good and bouncy the way it is generally, then New Zealand can pose a huge threat," added Pathan, who played 29 Tests for India.

Ross Taylor hits nets ahead of the first Test against India

Shreyas Iyer leaving no stone unturned ahead of his Test debut

Terming Shreyas Iyer as an “attacking red-ball player”, former national selector Jatin Paranjpe on Wednesday backed the right-handed batter to do well when he makes his Test debut for India against New Zealand on Thursday in Kanpur.

“We have seen him (Shreyas) playing white-ball cricket, so I think the majority of people doesn’t know that he is a really good red-ball player as well, a modern red ball player and an attacking red-ball player," Paranjpe told reporters at the MCA BKC here.

Who has scored the most runs against New Zealand from the current Indian Team? Check all the important stats here.

Head to head in Test - India vs New Zealand

Ajaz Patel opens up ahead of the first Test against India

Team India gears up ahead of the 1st Test

Coach Rahul Dravid rolls his arm over in the nets.

Ajinkya Rahane was not amused with questions related to his poor form, insisting that concerns about his lean patch are unfounded and contribution doesn't mean a Test hundred in every game.

Rahane, who averages 19 in 11 Test matches this year, seemed under visible pressure as he reasoned that even a "30, 40 or 50" from a specialist top-order batter would be an acceptable contribution provided the team wins.

A captain battling an existential crisis, a veteran pacer about to be phased out and a white-ball maverick trying to earn his red-ball stripes make for a heady combination as Ajinkya Rahane's second-string India aim to size up a gritty New Zealand in the first Test starting Thursday.

Rahane, with his career on line, gets to lead India may be one last time while 100-Test veteran Ishant Sharma will be praying that young turk Mohammed Siraj doesn't nudge him out.

Whoever gets into playing XI, Suryakumar Yadav or Shreyas Iyer, there aim will be to reaffirm 'Bombay (not Mumbai) School of Batsmanship' whose philosophy transcends beyond the white-ball riches of Indian Premier League.

It is indeed a rarity to find an Indian Test team that is without its hit opening pair of Rohit Sharma and KL Rahul. Also missing from line-up is skipper Virat Kohli and a genuine match-winning keeper-batter Rishabh Pant.

But this also gives head coach Rahul Dravid a chance to check out what his back-up bench strength is before the away tour of South Africa which starts in less than a month's time.

In the batting line-up for the first Test, only Rahane, Cheteshwar Pujara and Mayank Agarwal have played more than 10 Tests.

If Agarwal does well, that will keep KL Rahul on his toes and a good show from Shubman Gill will keep the team management interested in slotting him in the middle-order when the two regular openers come back.

Hoping to appear in only his third Test abroad, New Zealand pacer Kyle Jamieson is aware that the challenge of playing Test cricket in India will be different from what it is back home, his enviable record notwithstanding.

India and New Zealand will clash in a two-match Test series with the first game starting here from Thursday.

Jamieson, who has made a record-breaking start to Test cricket, with 46 wickets in just eight appearances, is undertaking his first tour of the country with the national team.

"I haven't played a whole lot of cricket over here. I had the first half of the IPL which was good, but this will be different again," Jamieson said.

"I've got Wags (Neil Wagner) and Timmy (Tim Southee) here, so that'll be good to bounce ideas off them, to get their expertise on how to bowl here.

"It's certainly going to be a different challenge to what we get back home but really looking forward to it," the tall pacer added.