Microsoft CEO Satya Nadella on CAA: What's happening is sad and bad too

Microsoft CEO Satya Nadella has voiced criticism against the Citizenship Amendment Act. A Hyderabad native, Satya Nadella also spoke about his multicultural roots and the importance of technology and immigration in his life and career. Below is the full text from Satya Nadella's words.

Microsoft CEO Satya Nadella has voiced his opinion against the new Citizenship law passed by the Central government last month. Speaking to BuzzFeed News Editor-in-Chief Ben Smith, Microsoft CEO Satya Nadella said he would love to see a Bangladeshi immigrant who comes to India and creates the next unicorn in India or becomes the CEO of Infosys. Nadella's comments came while talking to editors at a Microsoft event in Manhattan, where he was asked about the contentious issue of CAA which grants citizenship to persecuted non-Muslim minorities from Pakistan, Bangladesh and Afghanistan.

Satya Nadella hoped that every single immigrant who is provided the status of being a citizen of the country under the newly amended Citizenship Amendment Act, which has caused a lot of furore across the country, may aspire for a prosperous future and equally benefit the society and economy.

Later, Microsoft posted a Twitter statement that attributed to Nadella. The contentious Citizenship (Amendment) Act, 2019 that grants citizenship on the basis of religion came into force on Friday and has gathered widespread criticism since it was passed in both Houses.

"To me, in fact I obviously grew up in India and I'm very proud of where I get my heritage, culturally in that place, and I grew up in a city, I always felt it was a great place to grow up, we celebrated [unintel], we celebrated Christmas, Diwali, all three festivals that are big for us, I think what is happening is sad, primarily as sort of someone who grew up here, I feel, and in fact quite frankly, now being informed shaped by the two amazing American things that I've observed which is both, it's technology reaching me where I was growing up and its immigration policy and even a story like mine being possible in a country like this.

I think it's just, bad if anything I would love to see a Bangladeshi immigrant who comes to India and creates the next unicorn in India, or becomes the CEO of Infosys, that should be the aspiration, if I had to sort of mirror what happened to me in the US, I hope that's what happens in India.

I'm not saying that any country doesn't and should not care about its own national security, borders do exist and they're real and people will think about it, I mean after all immigration is an issue in this country, it's an issue in Europe and it's an issue in India, but the approach that one takes to deal with what is immigration, who are immigrants and minority groups, that sensibility.

That's where I hope these liberal values that we've kind of come to -- It's capitalism, quite frankly, has only thrived because of market forces and liberal values, both acting and I hope India figures it out, the good news at least as I see it is it's a messy democracy and people are debating it, it's not something that is hidden, it's something that is being debated actively but I'm definitely clear on what we stand for and what I stand for."

Shortly after Smith shared Nadella’s remarks, Microsoft tweeted a statement attributed to the CEO: “I’m shaped by my Indian heritage, growing up in a multicultural India and my immigrant experience in the United States. My hope is for an India where an immigrant can aspire to found a prosperous start-up or lead a multinational corporation benefitting Indian society and the economy at large.”

The Citizenship Amendment Act was passed by Parliament on December 11. According to the legislation, members of Hindu, Sikh, Buddhist, Jain, Parsi and Christian communities who have come from Pakistan, Bangladesh and Afghanistan till December 31, 2014, due to religious persecution will not be treated as illegal immigrants but given Indian citizenship.

Who is Satya Nadella? 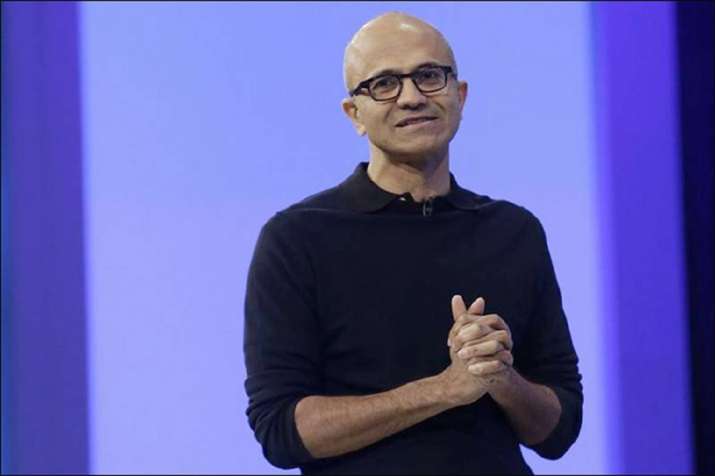 Satya Narayana Nadella is an engineer and Indian American business executive. He is the chief executive officer (CEO) of Microsoft, succeeding Steve Ballmer in 2014. Before becoming CEO, he was the executive vice president of Microsoft's cloud and enterprise group, responsible for building and running the company's computing platforms.

At Microsoft, Nadella has led major projects that included the company's move to cloud computing and the development of one of the largest cloud infrastructures in the world.

Nadella worked as the senior vice-president of Research and Development (R&D) for the Online Services Division and vice-president of the Microsoft Business Division. Later, he was made the president of Microsoft's $19 billion Server and Tools Business and led a transformation of the company's business and technology culture from client services to cloud infrastructure and services.

Satya Nadella has been credited for helping bring Microsoft's database, Windows Server and developer tools to its Azure cloud. The revenue from Cloud Services grew to $20.3 billion in June 2013 from $16.6 billion when he took over in 2011. He received $84.5 million in 2016 pay.